Centre urged SC to re-visit Nagaraj verdict which had imposed three conditions for grant of quota for SC/ST in promotions. 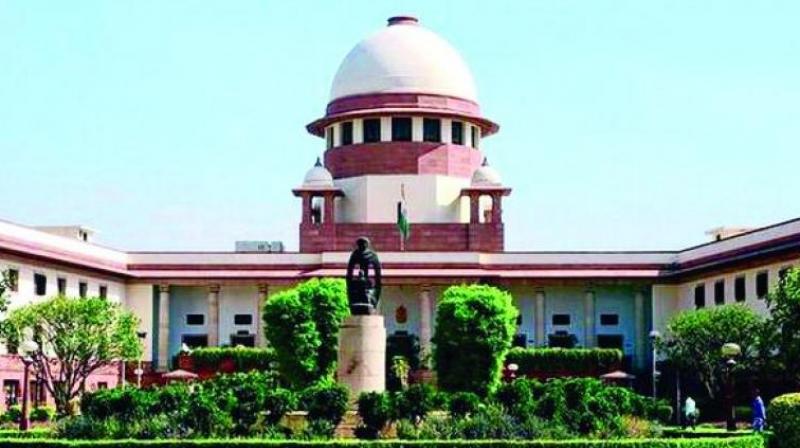 In October 2006, the SC in the case of Nagaraj vs Union of India has concluded the issue by holding that the State is not bound to make reservation for SC/ST in the matter of promotions. (Photo: File)

New Delhi: Ahead of the Lok Sabha polls in 2019, the NDA government on Friday pleaded in the Supreme Court for providing quota in promotion for SC/STs in government jobs and urged for reconsideration of 2006 verdict holding against such reservation in promotions.

The AG referred to the conditions in Nagaraj judgment and said it was a "situation of impossibility" to comply in every case with the conditions laid down in M Nagaraj's judgment.

When CJI asked the AG on the adequacy of reservation, he said in promotions too, the SC and ST together must account for 23 of every 100 promotions in a year. Otherwise, the affirmative action would remain an illusion.

He said there was no need for testing backwardness of SC/ST employees while granting promotion as the Supreme Court itself in Indra Sawhney case in 1992 had said test of backwardness does not apply to SC/STs as they are presumed to be backward.

When the CJI wanted to know as to why did the states, for all this time, not prepare quantifiable data to decide adequacy or inadequacy of representation of SC/ST in a cadre of government service, the AG replied: “Why because people die, retire. Data keeps fluctuating. Filling up of vacancies is a dynamic, continuous process.”

He said that only this quantum would satisfy adequacy of their representation. He said there has to be a presumption of backwardness for SC/ST and that the 2006 judgment should not have stipulated for satisfaction regarding backwardness of the class in providing reservation in promotion.

AG submitted that there was no need for further quantifiable data for showing backwardness so as to provide reservations for promotions. He told the court that the community as a whole has been facing discrimination from the upper caste and the intent of providing reservation in promotions to SC/STs was intended to provide affirmative action for the socially disadvantaged community.

He said the Nagraj judgment was unclear as to what it meant by quantifiable data and how it should be determined. “What is inadequacy? How is it determined? Your lordship has to decide,” Venugopal said.

He pointed out that the reservation was given to SC and ST communities to right a wrong they suffered for more than 1000 years. Atrocities on them happen even today, he said.

The AG pitched for overturning the Nagaraj judgment by seven judges, which would meet the ends of justice for SC/STs

In October 2006, a five-judge Constitution bench in the case of Nagaraj vs Union of India has concluded the issue by holding that the State is not bound to make reservation for SC/ST in the matter of promotions.

However, if they wish to exercise their discretion and make such provision, the state has to collect quantifiable data showing backwardness of the class and inadequacy of representation of that class in public employment.

There must be compelling reasons, namely, backwardness and inadequacy of representation, which enables the states to provide for reservation keeping in mind the overall efficiency of the state administration.

The CJI said, “We will first examine whether Nagaraj judgment has to be revisited and reservation in promotion in government jobs for SC/STs can be provided without data of inadequacy of their representation in the various cadres or services. The court will examine this issue in the light of controversy over several orders passed by different high courts cancelling promotions to SC/STs in government jobs.

Several states and employees associations had moved the apex court challenging the high court orders. They argued that once the President through notification has determined the backwardness of SC/ST, it couldn’t be determined further.

States and SC/ST employees associations argued that identification of creamy layer and their exclusion for reservation will not apply to SC/ST and promotions are to be provided in the government jobs, as it is a constitutional requirement

Supporting the high court judgments those affected by quota for SC/ST in promotion argued that as per Nagaraj judgment unless there is quantifiable data to prove that SC/ST are not properly represented in service, no quota can be provided.

Arguments will continue on August 16.