I-T department officials said about Rs 10 crore cash has been recovered during the search at properties linked to the minister. 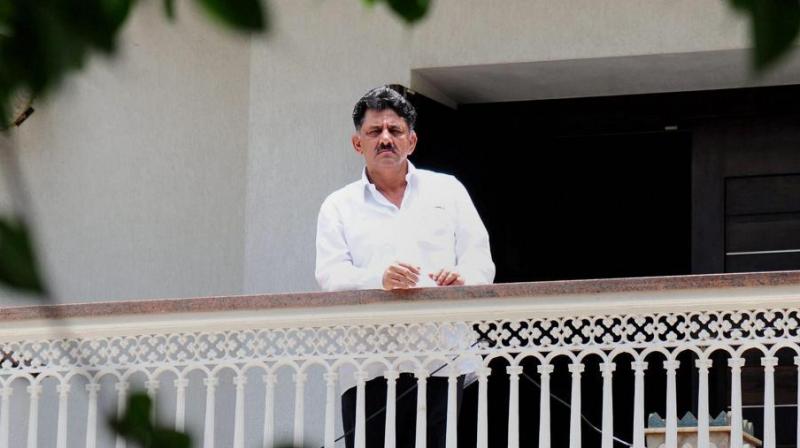 In a swoop down that raised a political storm, the I-T department had on Wednesday conducted searches at 64 locations and properties linked to Shivakumar in a tax evasion case. (Photo: PTI/File)

Bengaluru: The Income Tax raids on Karnataka Power Minister DK Shivakumar continued for the second consecutive day on Thursday, with the department conducting searches at his Delhi house.

The I-T raids on various properties linked to Shivakumar, who is hosting 44 Gujarat Congress MLAs at a resort on the outskirts of Bengaluru, continued on Thursday at his house in Delhi's Safdarjung area.

Official sources said the raids that began early morning on Wednesday went on till late in the night, with the minister being grilled at his residence at a posh locality in Bengaluru. The raids were continuing on Thursday as well.

In a swoop down that raised a political storm, the I-T department had on Wednesday conducted searches at 64 locations and properties linked to Shivakumar in a tax evasion case.

I-T department officials said about Rs 11 crore cash has been recovered during the search at properties linked to the minister.

He has been put in charge of 44 MLAs lodged in the resort, to keep the flock together for preventing the Bharatiya Janata Party (BJP) from "poaching" on them ahead of the Rajya Sabha polls in Gujarat where Ahmed Patel, political secretary to Congress president Sonia Gandhi, is facing a tough battle.

The ruling Congress in Karnataka will be holding a protest in the city later on Thursday against the raids on Shivakumar, accusing the Centre of "dictatorial" attitude and "murdering democracy".

Shivakumar, hailing from a modest agrarian family, is an influential Vokkaliga community leader and also one of the wealthiest state ministers in the country.

According to the affidavit filed by him for the 2013 Assembly polls, he had assets over Rs 251 crore, including those of his wife and children and liabilities of over Rs 104 crore.

Fifty five year old Shivakumar, considered a resourceful troubleshooter for the Congress with proximity to the party high command, is a six-time MLA.

He has also made known his chief-ministerial ambitions while making it clear he would bide his time.

I-T officials had on Wednesday said a "good amount" of jewellery has been recovered from a teacher's locker in a college from Bengaluru, adding it is in the name of a relative of Shivakumar.

The officials had said that about Rs 7.9 crore cash has been recovered from Delhi and Rs 2.23 crore found at locations in the southern state.

Certain investments linked to him in Singapore and few other foreign locations are also under the scanner of the department, they said, adding, some shell firms and their operatives allegedly linked to this case were being probed.

The raids at the resort had on Wednesday sparked a huge political row with Parliament getting disrupted and Congress calling it "unprecedented witch-hunt" to win one Rajya Sabha seat.

Chief Minister Siddaramaiah alleged it was a politically motivated action to silence the voice against the BJP.