India   All India  03 Jul 2020  Amid standoff with China, Modi dials Putin to congratulate him on winning constitutional vote
India, All India

MEA spokesman Anurag Srivastava did not give a direct answer when asked if the Sino-Indian border situation had been discussed. 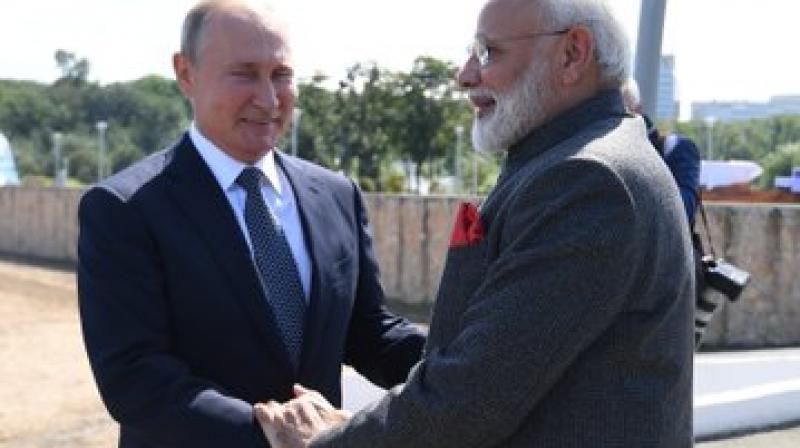 New Delhi: At a time when time-tested friend Russia is emerging as a key player in the India-China equation and has also been a major defence supplier to India for decades, Prime Minister Narendra Modi on Thursday spoke to Russian President Vladimir Putin and “conveyed his keenness to welcome President Putin in India” for the annual bilateral summit this year. The external affairs ministry said Putin “reiterated his commitment to further strengthen the special and privileged strategic partnership in all spheres”, but MEA spokesman Anurag Srivastava did not give a direct answer when asked if the Sino-Indian border situation had been discussed.

The MEA said the two leaders “agreed to maintain the momentum of bilateral contacts and consultations”, and that Putin thanked the PM for the phone call and reiterated his commitment to further strengthen ties.

It added: “The Prime Minister warmly congratulated President Putin on the success of celebrations marking the 75th anniversary of the victory in the Second World War, and also for the successful completion of the vote on constitutional amendments in Russia. The leaders took note of the effective measures undertaken by the two countries to address the negative consequences of the COVID-19 global pandemic and agreed on the importance of closer India-Russia ties for jointly addressing the challenges of the post-COVID world.”

In its own statement, Russia said: "The two leaders discussed topical issues on the Russian-Indian agenda and confirmed their mutual commitment to strengthening the privileged strategic partnership".