Bhikhubhai had decided that he would cycle from Amreli to Delhi if BJP won more than 300 seats in LS polls, cycled 1,100 km in 17 days. 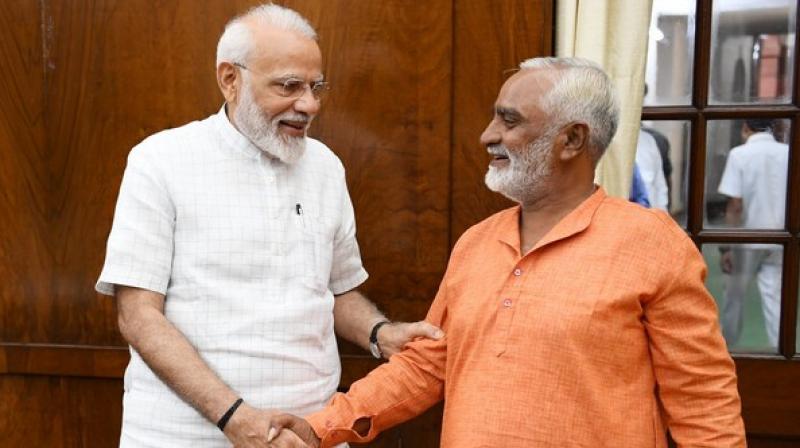 Modi also tweeted four photos alongside, one from the interaction and three others of Bhikhubhai from his journey. (Photo: ANI)

Bhikhubhai had decided that he would cycle from his home town to the national capital if the BJP wins more than 300 seats in the Lok Sabha elections.

After the party's thunderous victory on 303 seats, Bhikhubhai kept his word and completed the 1,100 kilometre distance in 17 days.

Amreli district is around 100 kilometres away from Gujarat's Rajkot.

Prime Minister tweeted about the meeting stating, "Met the exceptional Bhikhubhai from Amreli, Gujarat. Bhikhubhai had decided that if BJP wins 300+ seats, he would cycle from Amreli to Delhi. He kept his word and am told that his cycle journey has drawn several admirers. I was deeply impressed by his humility and passion."

Modi also tweeted four photos alongside, one from the interaction and three others of Bhikhubhai from his journey.

In the photos from his long travel, Bhikhubhai is seen wearing a tilak on his forehead, standing beside his cycle, adorned with photos of the prime minister. It also had slogans in Hindi saying, "Modi hai to mumkin hai" and "Ab ki baar huye 300 paar".

"I took an oath before the Lok Sabha elections that if BJP wins more than 300 seats in the elections, I will travel all the way from Amreli to Delhi on my bicycle and meet Prime Minister Narendra Modi and Union Home Minister Amit Shah to congratulate them for their triumph," Bhikhubhai said after meeting Modi.

Explaining his tedious journey, he said, "It took me almost 17 days to cover 1170 kms, I used to cover almost 70-80 kms on a daily basis. I used to stay in temples and ashrams on my way. I had a conversation with the PM for hardly five minutes, he told me that I am very brave to cover such expedition all the way from Amreli."

The BJP had won 303 parliamentary seats in the recent elections.