India   All India  03 Jul 2019  Man on bike swept away in flood water in Madhya Pradesh’s Khargone
India, All India 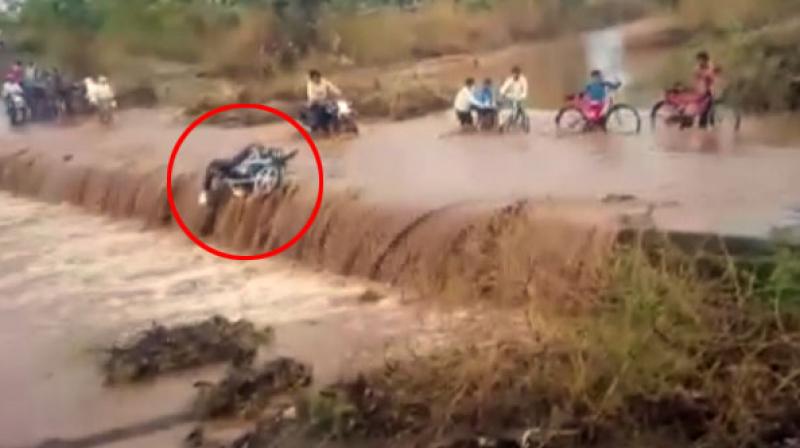 The entire incident was captured on a mobile phone by an eyewitness. (Photo: ANI)

Khargone: A man on his motorbike swept away while crossing a flooded road in Khargone on Wednesday morning.

The entire incident was captured on a mobile phone by an eyewitness.

#WATCH Madhya Pradesh: A biker was swept away while crossing a flooded road in Khargone. He was later rescued by locals. (02.07.19) pic.twitter.com/uXYK0HlhuL

The victim was later rescued safely by the people present at the spot.

"Monsoon is yet to reach Chambal and Gwalior. Rest all other areas of Madhya Pradesh have been hit by the monsoon. A good weather system has arrived this time. On Wesnesday, Bhopal is expected to receive 1 cm to 2 cm rainfall and tomorrow 3 cm to 4 cm," said Ajay Shukla, Scientist, IMD.

Due to heavy rains, roads in the tribal zone of Khargone district were waterlogged. The roads were jammed for as many as three hours due to river drains.

The blockage of roads posed a problem for the two-wheelers and bullock carts.