The minister announced a Rs 5 lakh reward for motorman Chandrashekhar Sawant who had done his job well. 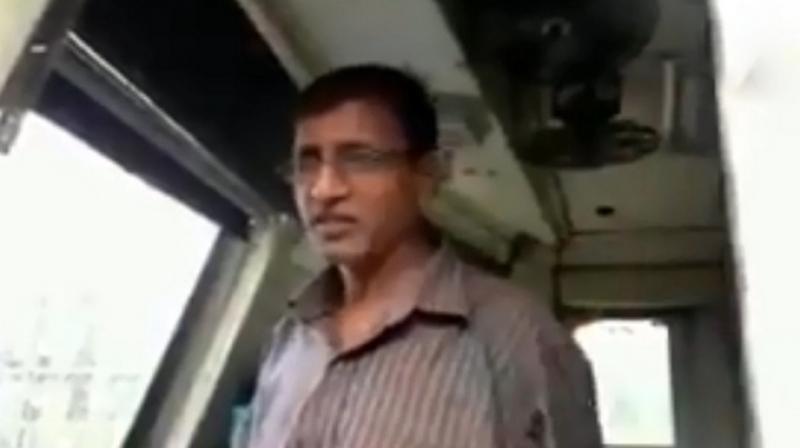 ‘I immediately applied emergency brakes when I saw the line snap. A major accident was averted as it was peak hour and a lot of people were around,’ local train driver Chandrashekhar Sawant said. (Photo: Twitter | ANI)

Mumbai: The effects of monsoon on Mumbai were visible when five people were injured on Tuesday morning after a section of a bridge caved in at Mumbai's Andheri station following incessant rains.

But the tragedy could have been much bigger had it not been for Chandrashekhar Sawant, the driver of a local train that was approaching the station seconds after the mishap. Sawant saw the foot over bridge collapsing from a distance and quickly applied the emergency brakes.

The local train stopped just a few metres from the collapsed bridge which had ripped off overhead wires left on the tracks.

‘I immediately applied emergency brakes when I saw the line snap. A major accident was averted as it was peak hour and a lot of people were around,’ Sawant said.

"Slabs had started falling as we were approaching the bridge. By the time I hit the emergency brakes, the slabs had fallen... We stopped at a distance of hardly 60 metres," NDTV quoted Sawant saying.

Sawant's presence of mind prevented what Railways Minister Piyush Goyal said could have been a much bigger tragedy.

The minister announced a Rs 5 lakh reward for motorman Chandrashekhar Sawant who had done his job well.

“I would like to thank motorman Chandrashekhar Sawant who stopped the train as soon he saw an over head electric line snap and averted a bigger mishap. He will be awarded Rs 5 lakh,” Railways Minister Piyush Goyal said.

The driver, however, was modest about his achievement. We are trained for this, he told reporters, nonchalantly.

The 40-year-old foot over bridge crumbled around 7.30 am.

According to reports, at least three packed suburban locals had passed by, seconds before the bridge caved in on the railway tracks.

The collapse blocked train services on one of three main railway lines into the financial capital of the country. Traffic at the bridge was also stopped.

“I got design of this bridge studied. This bridge is Cantilever bridge and is around 40 years old. Safety audit will be done of 445 bridges in Mumbai suburban. As per findings of audit, necessary action will be taken at the earliest,” Union Minister Piyush Goyal said after visiting the site of collapse in Andheri.

The minister added that the bridge was last audited in 2017 and the results did not show any abnormalities. He has ordered a probe to be completed within 15 days.

Piyush Goyal also said that ad hoc compensation of Rs 1 lakh will be given to 5 people injured in the incident and added that the railways will take care of their treatment expenses.