In many cases of lynching, locally organised cow protection groups take the lead and incite mob violence against hapless victims. 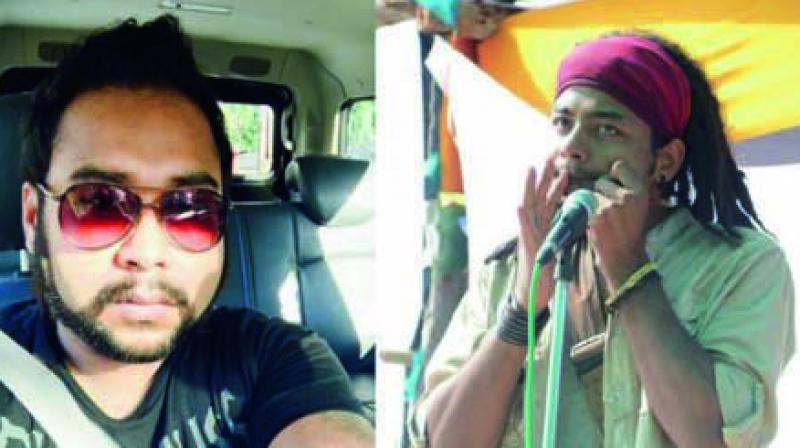 Abhijit Nath and Nilotpal Das, who were lynched by a mob in Assam’s Karbi Anglong district.

Lynching, which means killing of individuals by mobs, is a public crime. However, it is not listed as a separate crime under the Indian Penal Code (IPC). Hence, information about it can be gained only from media and fact finding reports.

On July 1, five nomadic beggars in Dhule district of Maharashtra were lynched based on the rumour of child-lifting. The week from June 13 to 20, 2018 saw four Muslims lynched at Hapur (UP) and at Godda and Ramgarh in Jharkhand.

According to web portal IndiaSpend, 25 Indians were killed in 60 cow related violent incidences between 2010 and 2017.

Ninety seven per cent of these incidences were reported after Modi govt came to power in 2014, and 84% per cent of those killed were Muslim. A July 2017 report from the pro Right Wing think-tank, Observer Research Foundation, found a sharp increase in cow related violent incidences among total cases of mob violence. These incidences rose from less than 5% of cases of mob violence in 2012, to more than 20% by June 2017.

In many cases of lynching, locally organised cow protection groups take the lead and incite mob violence against hapless victims. Hate filled messages fabricated with lies are spread on social media to gather crowds. Police is a passive accomplice, and in most cases, criminal cases are filed against victims themselves under cow protection laws.

The increased lynching of minorities in the last four years is closely related to local level Hindutva outfits and a supportive state power. However, it needs to be underlined that even without these two factors, individuals and communities in India face lot of violence which enjoys passive, or active public approval. Dalits have been facing caste violence for thousands of years. Even now, despite constitutional provisions, many of them face every day public humiliation. Massacres of dalits by gangs of caste Hindus at Kilevenmani, Bathani Tola, Laxmanpur Bathe, Khairlanji are among the darkest spots in post independence Indian history. More recently, at Una in 2016, four dalit youth skinning dead cattle were publicly beaten by a cow protection gang, and the video recording of the beating was widely shared as a proof of just punishment. Reply to a question in Parliament in the monsoon session of 2017 mentioned 288 cases of honour killing between 2014 and 2016.

Lynching: Prelude to Fascism
While the lynching of minorities is largely political, the caste and ethnic violence and honour killings are social systemic. While the crowd created by political parties with a purpose indulges in violence, the unorganised association of people carries out the killing on certain faulty premises. People also take the law into their hands thinking that those they target may escape the clutches of law if let free.

Since the beginning of the year, incidences of such lynching have taken place in states like Tamil Nadu, Andhra Pradesh, Telangana and Assam, which otherwise show little evidence of communal lynching. The most common excuse is suspicion of child abduction. Allegations of petty theft, witchcraft, etc are other reasons cited. Adivasis, mentally disturbed persons, migrant workers, single women and even tourists have been targeted. One media report (atboomlive.in) lists 13 dead due to lynching in such cases in the first half of 2018. Such violence is treated just a crime by state authorities. In reality, its prevalence all over India is a symptom of a deep social malaise.

It indicates a very low level of opposition to violence per se in our society.

All decent human beings feel revulsion against lynching of a fellow being. However, an appropriate social corrective and a political response are also important. Democracy is not possible in a society which accepts mass violence as a norm. A society which accepts different kinds of social systemic and random violence as routine, can become an easy prey to political violence of Fascism. Fascism is anti-democratic, precisely because it uses violence as a political tool against selected social and political groups. If fascism is made easy by mass acceptance of violence, its success legitimises violence and further lowers the threshold level of acceptance of violence.

No Support in Hindu History as well
Just in context, there isn’t much support for cow worship in ancient Hindu texts (Ramayana and Mahabharata), nor among Hindu scholars like Swami Vivekananda (Madurai lecture) or V.D. Savarkar (Samagra Savarkar Vangmaya). Swami Vivekananda: “There was a time in this very India when, without eating beef, no Brahmin could remain a Brahmin; you read in the Vedas how, when a Sanyasin, a king, or a great man came into a house, the best bullock was killed; how in time it was found that as we were an agricultural race, killing the best bulls meant annihilation of the race.” Savarkar was dismissive of cow worship: “A substance is edible to the extent that it is beneficial to man. Attributing religious qualities to it gives it a godly status. Such a superstitious mindset destroys the nation’s intellect. Let the movement for cow protection be based and popularised on clear-cut economic and scientific principles.”

Global Context of Lynching
Lynching has originated in North America. The hordes of white settlers who swarmed the Americas in 16th and 17th centuries first lynched and eliminated the Native Americans to rob their lands. The next victims were the African Americans and 3,446 African Americans were lynched between 1882 and 1968.

Documented history shows lynch mobs roaming the streets of Washington D.C. during the “Red Summer” of 1919, attacking African-Americans in a frenzy whipped up by racism, anti-communism, fears of joblessness, and post-war jingoism. Further, at least 605 Hispanic Americans were lynched in the United States between 1848 and 1928. In fact, once vociferously targeted groups were Mexican-Americans, Chinese labourers, Italians, anti-Capitalist and “unpatriotic”union activists, homosexuals, Jews, and Mormons.

American-Arabs, Moslems, and Sikhs attacked by strident patriotic mobs in misplaced retribution for 2001’s horrific “9-11” events were another spate of lynching in the US. While hysteria was certainly an element of lynch mob behaviour, perhaps a persistent one, other aspects of the experience seemed more deliberate and conscious. Many of these public displays of unimaginable brutality were ritualised affairs, carefully orchestrated.

Lynchings were public demonstrations of white power and a means to exert social control. Racial tensions had an economic base. In attempting to reconstruct the plantation economy, planters were anxious to control labour. In addition, agricultural depression was widespread, and the price of cotton kept falling after the Civil War into the 1890s. Lynchings erupted when farmers tried to terrorize the labourers. We can see initial signs of lynching connected to destabilising carpet or zari industry, cattle business etc run by minorities and dalits in India, and also land mafia at times encouraging lynching to get prime land in India.

Lynching in the Era of Modi-Shah led BJP
Since the political successes of BJP under Modi, India is witnessing not only a degradation of institutions of democratic governance, but also degradation of public morals. The more people show acceptance of the current style of aggressive bravado and blatant use of lies and abuse in public discourse, more they become insensitive to others; and then they also become more likely to turn into brutes at any opportunity of lynching.

The mindset of plain bigotry to avoid a cab driven by a Muslim or not to be serviced by a Muslim delivery boy to lynching; the other on the basis of rumours runs exactly opposite to the famed Indian value of Vasudhaiva Kutumbakam (the world is my family), which PM Modi declared as a guiding principle of his government. Refusal to take note of, or delayed condemnation of sectarian violence, by those in positions of power, signal tolerance of such activity.

The changing narrative in the Modi-Shah-Yogi era leads to Taj Mahal ceasing to be an architectural marvel and becoming a symbol of Muslim invasion and conquest. History and science become sites of communal contest, in which fact succumbs to mightier fiction or post-truths, causing planes to fly in ancient India, soaring over hospitals performing plastic surgery and producing test tube babies. Rana Pratap and Akbar undergo role reversals as to who defeated whom.

Every inter-faith marriage becomes an instance of love jihad. Love is turned into the fodder of hatred. The irony is that both the people who are lynching and who are lynched belong to the same strata of society — Lower middle class or poor.

In independent India, we saw this mob violence in its ugliest form in the 1984 killings of the innocent Sikhs in Delhi by the goons of Congress. Every political party encourages this mob violence.

Each political party criticises mob violence only when the ‘mob’ does not subscribe to their ideology or is not affiliated to them. And today, there is a natural, near-universal suspicion that the BJP is actually quite happy with the Hindu vote consolidation that Muslim hunting might bring about.

The other serious aspect is the role of social media, specially Facebook WhatsApp. The police now say that gory WhatsApp images of cows and blood flamed passions ahead of the Dadri lynching. How come the agencies say thisafter the deaths? Muzaffarnagar, Shamli, Baghpat and Meerut — the violence of 2013 was made possible because of the sprinkling of hatred spewed via the visual-text communications threw up a challenge to law and order authorities by the salacious use of the widely used chatting app WhatsApp.

Same goes on today in Alwar, Hapur, Assam. Has any action related to the source of these images and messages circulated on WhatsApp been taken by the UP or Rajasthan home ministry, or the Union home ministry?

Way Ahead: Resist Violence
Political parties and social organisations should make special efforts to prevent incidences of public violence. Mass campaigns, especially involving youth and students should be started against this culture of violence.

All “cow protection” gangs involved in terrorising and lynching be banned. Cow protection laws which give a legal fig leaf to such gangs should be repealed all over India. Police and Courts should take an unambiguous stand against lynching and perpetrators punished at the earliest. As in the case of sexual violence, a special law should be made against lynching and given wide publicity to make people aware of legal punishments.

If corrective measures are not taken today, the acceptance of lynching on perceived righteousness will permeate the social fabric soon and it will be tough to reverse the process later.

The author is a noted media academic and columnist, and former Dean of Symbiosis and Amity Universities.