Pinarayi Vijayan said that Meira Kumar is the representative of the fight for minorities and Kerala would unanimously support her. 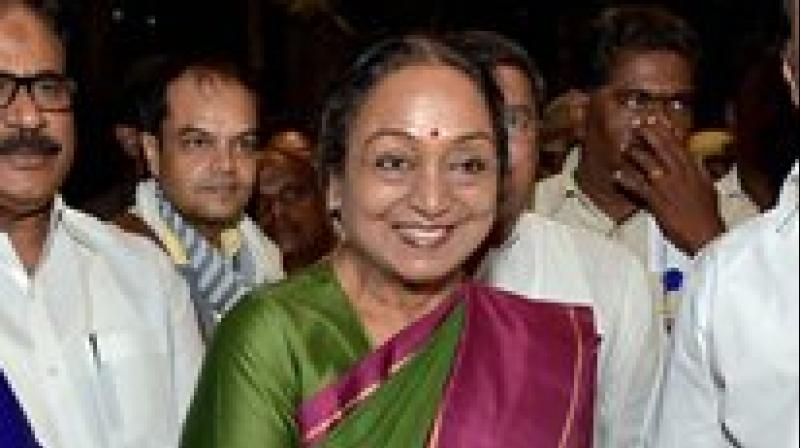 Opposition presidential candidate Meira Kumar said, Kerala sets an example of how to live together in peace and with love and affection. (Photo: PTI)

Thiruvananthapuram: Opposition presidential candidate Meira Kumar on Sunday stressed upon the need to rid the society of caste bias and strive for dalits' emancipation.

"Our political freedom will be meaningless unless we are able to rid the society of caste prejudices and emancipate dalits," she said, addressing a gathering of MPs and MLAs from the ruling CPI(M) led LDF and opposition Congress led UDF in Thiruvananthapuram on Sunday evening.

"All this is under serious threat. It is in danger. We are committed to ending poverty. We are here not to suppress the poor regardless of which religion they come from," she said.

Kerala Chief Minister Pinarayi Vijayan, former chief ministers V S Achuthanandan and Oommen Chandy and Opposition Leader in the Assembly Ramesh Chennithala were among those who shared the dais with Kumar.

Describing Kerala as a 'unique' state with 100 per cent literacy, which other states are still striving for, and communal harmony, she said the state is an example of how to live together with peace, love and affection.

"Seventeen major political parties unanimously decided to articulate very powerfully and strongly their desire to face in this presidential contest, the forces which are threatening the ideologies which we hold so dear. In this unanimous decision, many of the parties who had hitherto followed different paths, have come together by taking very firm ideological positions," she said.

"It is a great honour that they have reposed in me. The ideologies which we are fighting are sacred. We fight for the most suppressed, most marginalised and most humiliated," the former Lok Sabha speaker said.

While admitting that it was a 'difficult fight,' she said there have been many contests for presidentships. Stating that this was the first time that the fight was for ideologies, she said the country is at the crossroads. "There is no tolerance, There is so much fear," she said.

Pointing out that she had asked members of the collegium to listen to their ‘inner voice of conscience,’ Kumar said the people question her on numbers, but "I have said I have tremendous faith in ideals and the inner faith of conscience."

Vijayan said that at the national level, communal forces are unleashing violence and noted that recently two siblings were attacked during a train journey with one of them losing his life. "Some people are trying to decide what others should eat and wear ... several actions posing a threat to the secular fabric of our nation are taking place," he said, adding that nothing much can be expected from "an RSS-BJP led government."

"We have to protect our constitution and the interest of minorities," he said, adding that Meira Kumar is the representative of this fight by secular forces and Kerala would unanimously support her. Chennithala said the ruling CPI(M)-led LDF and opposition Congress-led UDF had set aside their differences to support Meira Kumar's candidature.

"Never before has the communal venom been so injected in the political system of the country to divide the people. Those eating beef are being killed. Though the Prime Minister has decried such incidents, no action has been taken," he said, adding that the fight is against the communal and divisive forces. The lone BJP MLA, O Rajagopal, was not present.