Attempts have been made to provoke people over various issues in the name of religion. 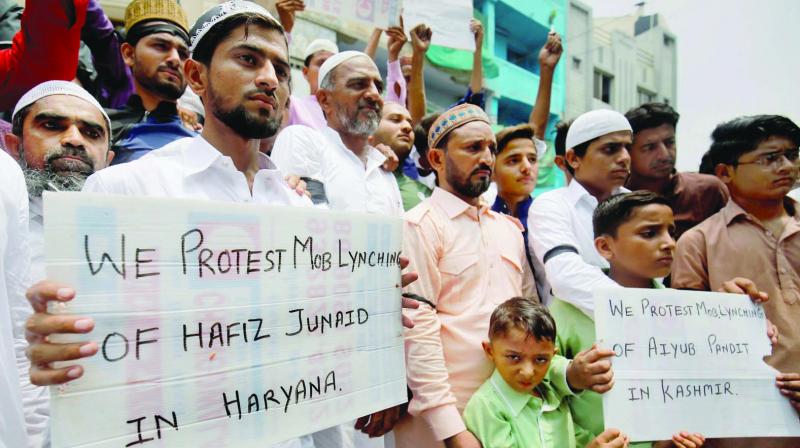 Muslims hold posters and tie black ribbon on their arms during a protest against recent mob lynching in Haryana in Ahmedabad . (Photo: PTI)

Secularism is still very much alive in India. This has been proved by massive demonstrations staged throughout the country in protest against lynching of Junaid Khan. Yes, the hard reality cannot be ignored that he was murdered by a few aggressive people primarily because of his religious identity. Yes, it is true that now and then incidents are still taking place in different parts of the country with Muslims being targeted for no fault of theirs. Yes, whenever any such incident takes place, questions are raised about safety and security of minorities in the country against the communal behaviour being displayed by certain elements.

Demonstrations across the country, under the banner “Not In My Name”, have certainly shown that by and large Indian public is not pleased at brutal murder of Muslims. Clearly, this proves that attempts being made to polarise the Indian community along religious lines have failed to take off as probably planned by extremist, communal groups. The demonstrations also prove the point that compared to an extremely minimal number of persons, who have displayed their communalism, the number of secular Indians who have participated in these against their lynching is much larger. This sends a strong message to extremist groups and also the world at large that impact of communalism carries little weight against secularism still remaining very active among Indians at large.

Perhaps, it is too early to assume that demonstrations of this kind will have a forceful impact on preventing any other communal lynching in coming days. Yet, it certainly is likely to send alarming signals to politicians in power about the negative impact that these may have on their attempt to don a secular mask during electoral campaigns. The demonstrations have at least succeeded in sending a message that Indian public should not be assumed to be silent each time a communal lynching takes place. The Indians should not be expected to allow communal behaviour of this nature to continue without any serious attention being paid to take needed action against those responsible for lynching.

Please note, the participants in demonstration had only one relation with Junaid and others targeted similarly. That is their citizenship. None had ever met or known them ever. But the people surged forth, displaying their anger against occurrence of such incidents and failure of concerned officials to prevent the same. Yes, humanitarianism also stood out in demonstrations taking place outside India. Perhaps, it is time that this message must be understood seriously by those having so far chosen to remain mute observers to communal practices. If they are under the impression that playing the communal card will help them politically in winning Hindu votes, they need to think again. More than 90 per cent of demonstrators in most parts of the country were Hindus. Also, if the majority of Hindus did not believe in secular democracy, communalism would probably have proved extremely dangerous for most Muslims in the country.

Communal drive in recent era displayed its worst phase when riots took place in most parts of the country over the controversial Ayodhya issue, following demolition of Babri Masjid. It cannot be forgotten that even during that phase, it would be wrong to assume that each and every Indian Hindu and Muslim was involved in communal rioting. Rather, a greater percentage chose to abstain from the same. A decade later when Gujarat carnage took place, it is noteworthy that it was primarily confined to this state only. During this period, people in other parts were not provoked to similar communal rioting despite reports of Gujarat carnage being telecast. Clearly, this conveyed a strong message. It was not easy to weaken secularism of Indian community throughout the country.

Interestingly, the post-Gujarat carnage phase has not been witness to any other state being gulfed by communal crisis of a similar nature. Undeniably, attempts have been made to provoke people over various issues in the name of religion. But they have failed to have any major impact of negative nature. Yes, history has been witness to mobs indulging in communal rioting with colonies of targeted people’s houses and shops being burnt down. At the same time, it cannot be ignored that recent phase has not been witness to history of this nature being repeated. Communal incidents of present period have primarily involved a few individuals, in few cases, dozens targeting one or two individuals.

Against this backdrop, the successive decline in nature and frequency of communal rioting cannot be missed. Those who still remain pessimistic about success of Indian secularism need to pay serious attention to this reality. Yes, there lurks a fear that failure of concerned politicians and officers to take strong action against extremist, communal elements is likely to encourage the latter to continue with lynching activities as and when it pleases them. Well, in this case, the recent demonstration has certainly indicated that Indians are not going to keep quiet against communalism of this nature. The manner in which secularism has raised its head only indicates that it should not be expected to bow down before communalism!

Nilofar Suhrawardy is a senior journalist and writer. She has come out with two books Ayodhya Without the Communal Stamp and Image and Substance: Modi’s First Year in Office

Tags: secularism, not in my name, junaid khan lynching