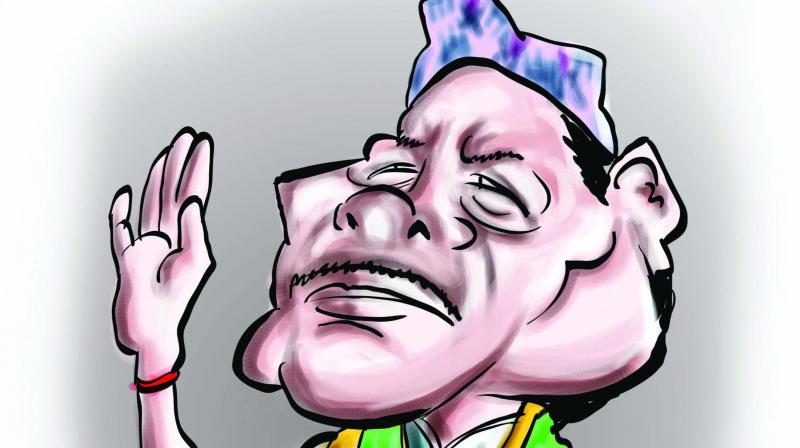 Born in a family of tea garden workers on July 17, 1964, Mr Gurung faced many hurdles in pursuing education.

Kolkata: An astute politician, Bimal Gurung has tactfully managed to turn the recent agitation in Darjeeling Hills against “forced” teaching of Bengali in schools into a fresh push for a separate Gorkhaland.

Later, the West Bengal government softened its stand a bit by making Bengali learning optional in schools falling within the jurisdiction of the Gorkhaland Territorial Administration (GTA) but Mr Gurung was in no mood to pull back.

The Bengali learning issue served as an ideal platform for him to revive his long-standing demand for Gorkhaland. It gave him another opportunity to highlight that the hills are culturally, linguistically and geographically different from the rest of West Bengal.

“I was born to fight for Gorkhaland,” said the 52-year-old Gorkha, adding that the hill people would not spare him if he failed.

During the current three-week agitation, he urged people to be prepared for the final battle as the time had come for a do-or-die fight to achieve the dream of Gorkhaland.

The Gorkha leader appears to have taken a gamble with the mass resignations of members of his outfit, Gorkha Janmukti Morcha, from the GTA — the semi-autonomous administrative body for Darjeeling hills. Mr Gurung had became the chief executive of GTA after GJM candidates won all the seats in the GTA elections held on July 29, 2012.

For him the Constitution of the GTA was never going to dilute the demand for a separate state.

The mass resignations have proved that taking risks comes naturally to him. He took another political gamble in 2007. The ambitious Gorkha leader floated the Gorkha Janmukti Morcha  to fight Darjeeling Gorkha Hill Council (DGHC) chief Subhash Ghising – by far the tallest Gorkha leader.

He took on Mr Ghising after the popular mood turned against the latter’s  proposal to include the Darjeeling Hills in the Sixth Schedule of the Indian Constitution which earned the district council more powers like the autonomous district councils of Assam, Meghalaya, Mizoram and Tripura.

Born in a family of tea garden workers on July 17, 1964, Mr Gurung faced many hurdles in pursuing education despite the best of efforts by his parents Bharat and Chandramaya Gurung.

Mr Gurung’s own website lists “Politics, Social Service and Games” as his interests. Going by the rise over the past few decades, he seems to have more than excelled in politics.

He. initially, joined the Gorkha National Liberation Front (GNLF) when it launched a  movement for a Gorkha homeland in 1986.  He began by enrolling himself in the Gorkha Volunteers’ Cell (GVC), the GNLF’s youth wing. Mr Gurung, however, quit the GVC soon after the GNLF signed the 1988 Darjeeling Accord with the Centre and the West Bengal government, leading to the formation of the Darjeeling Gorkha Hill Council (DGHC).

He came into limelight once again in 1992 when he launched an organisation for the unemployed youth in the hills. In 1999, Mr Gurung won the DGHC bypoll as an independent candidate from Tukvar constituency.

The GNLF welcomed him to the party and entrusted him the role of the DGHC sports and youth affairs department.

He gradually rose to prominence as he nurtured the demand of Gorkhaland and wooed the people of the hills to join the statehood movement.

In 2007, Mr Gurung launched the GJM and his resolve earned him rich dividends in 2011 when the outfit won three seats in Darjeeling. Thereafter, the Gorkhaland Territorial Administration accord was signed between the GJM, the West Bengal government and the Centre. This was the beginning of his innings as the GTA chief.

Now, he is also serving as a binding factor for all Gorkhaland supporters. Harka Bahabur Chhetri, who launched a separate hill party Jan Andolan Party last year after quitting the GJM, was seen attending the protests recently.

Mr Chhetri said, “This movement cannot be led by a particular political party. Now the public sentiment with the movement has become very strong. That is why we attended the all-party meeting and placed our views.”

The GJM is confident of getting a Gokhaland by 2019. R.B. Bhujel, a confidant of Mr Gurung, has repeatedly said that as a National Democratic Alliance partner, the GJM would make BJP create Gorkhaland before the 2019 Lok Sabha elections.

He claimed the West Bengal government was against separation and added that the BJP had  not betrayed them as the work was under progress in New Delhi.

For the BJP, it is a tricky situation. If it supports ally GJM’s demand on Gorkhaland, it stands to lose ground in the rest of Bengal. If it rejects the demand, it may risk losing an ally.