GST to be implemented in J&K in next 3 to 4 days: Jitendra Singh

BJP has directed all MLAs to remain present during proceedings of both the Houses on all days for the passage of the GST bill. 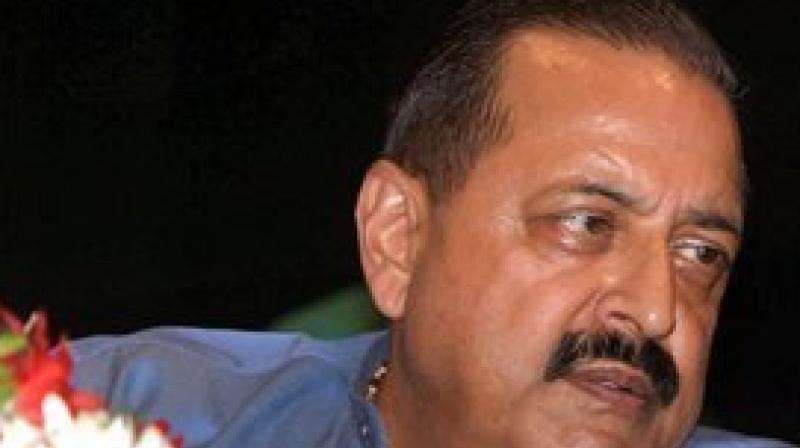 Jammu: Union Minister Jitendra Singh on Sunday said the Goods and Services Tax (GST) will be implemented in Jammu and Kashmir in the next three to four days, as he sought to play down reports of differences between the BJP and the PDP, the ruling coalition partners in the state.

He said there were ‘hiccups’ raised by the Opposition parties for ‘political consideration’ and that the non-implementation of GST would lead to losses for local industries and traders. J&K is the only state which has not taken a call yet on the implementation of the new tax regime, which came into force in the country from Friday midnight.

The Minister of State in the Prime Minister's Office (PMO) replied in negative when asked whether the BJP had ‘surrendered’ before the PDP as far as the GST was concerned, amid reports of differences between them.

He said not only the BJP or the PDP but the entire nation was on the same page vis-a-vis the implementation of the GST, the biggest tax reform in India since Independence. "It is not a question of the BJP, the PDP or the Congress. 125 crore people of this country are dictating us to be on the same page and there cannot be anything otherwise," he said.

"Both the coalition partners are on the same page. There is no difference of opinion on the GST. There were hiccups raised by Opposition parties for political consideration, but they have also realised that they cannot carry it forward. Now they are exposed," he added.

Meanwhile, a core group of the BJP met in Jammu on Sunday to discuss the strategy for the four-day special session of the Jammu and Kashmir Legislature, starting from Tuesday, for the passage of the GST Bill.

The party has directed all its legislators to remain present during proceedings of both the Houses on all days. The meeting of the core group was held under the chairmanship of the BJP's National General Secretary, Ram Madhav. Union Minister of State in the PMO Jitendra Singh and Deputy Chief Minister Nirmal Singh were also present.

Speaking to reporters after the meeting, the BJP's state chief Sat Sharma said, "All party legislators will take part in the special session from July 4 to 8. I feel that before July 8 the announcement of GST implementation in the state will be made."

Jitendra Singh, Lok Sabha MP from Udhampur, said the traders would face losses everyday on account of non-implementation of the GST in J&K.

On June 30, J&K finance minister Haseeb Drabu had said the state was likely to clear GST by July 6 while he was in Delhi to attend the midnight launch of tax regime in the central hall of the Parliament.

Union Finance Minister Arun Jaitley had last week written to Chief Minister Mehbooba Mufti, saying the failure of the state to implement the GST would lead to ‘adverse impact’ of price rise and put the local industry at a disadvantage.

In view of differences among the political parties, the state government had set up an all-party consultative group to find a common ground. The consultative group held its second meeting on June 29 after which the government claimed that the parties were in agreement on extension of the new tax regime but with safeguards to protect the fiscal autonomy of the state.

Drabu had earlier said the Mehbooba Mufti government was ‘genuinely interested’ in building a consensus because the GST was a regime that would last for the next 30-40 years.

"We will take a final call on the GST implementation once we get the full sense of the all-party meeting. I do not want to preempt anybody. Let us understand what their views are," he had said. Drabu had said the state government had reached out to the Opposition parties of the state and sent them all the relevant documents. He had said a perception has been created that the GST would impact the special status and the fiscal autonomy of the state, but there was no compromise on Article 370.

"The government is trying to build a consensus. This is a very fragile society. We are going through difficult times.... the way things are happening around us, the way things have been dehumanized, anything can spark off. You do not want to create social chaos. "So, it is in the interest of the society of J&K, not just the economy, to build a certain political as well as legislative consensus," he had said.