India   All India  03 Jul 2017  Centre and state working to improve 'poor' condition of farmers: UP CM
India, All India

Centre and state working to improve 'poor' condition of farmers: UP CM

Adityanath said the 'historic' launch of GST will benefit the poor, curb hoarding and will bring the menace of 'inspector raj' to an end. 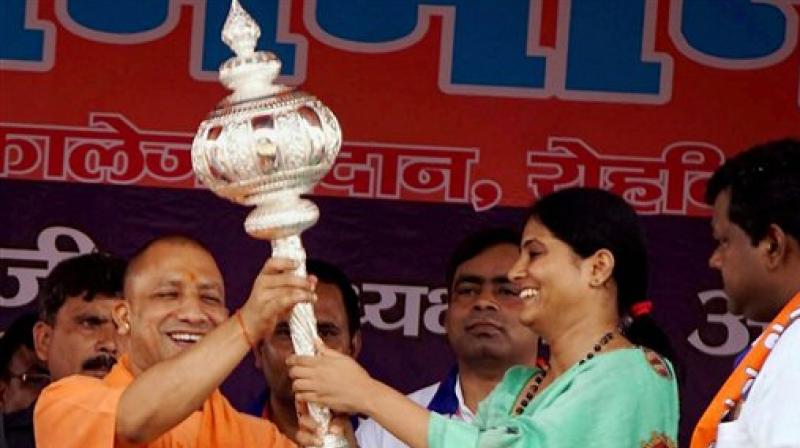 Varanasi: Expressing anguish over the ‘poor’ condition of farmers across the country, Uttar Pradesh Chief Minister Yogi Adityanath on Sunday said that the Centre is making efforts to double their income while the state government will open 20 new agricultural research centres.

"We all need to think about how to improve the poor condition of the farmers," he said adding that "Prime Minister Narendra Modi is worried about them and the NDA government is making efforts to better their living conditions".

He was addressing a 'Jan Swabhimaan' rally organised by BJP ally Apna Dal in Varanasi at the Jagatpur Inter College ground on the 68th birth anniversary of Apna Dal founder Sone Lal Patel.

Lauding Prime Minister Narendra Modi for the launch of the Goods and Services tax, Adityanath said the ‘historic’ event will benefit the poor, curb hoarding and will also bring the menace of 'inspector raj' to an end.

The GST was launched in the best interests of the country and without caring for any political benefit, he said. Adityanath reiterated that the "rule of law will prevail in Uttar Pradesh" and added that the state will be freed from crime, corruption and caste system. There would be no discrimination in the distribution of electricity and all the 75 districts of Uttar Pradesh will get equal power supply, he said.

In an apparent attack on rival parties, he said that the BJP led UP government follows 'sabka saath sabka vikas' (With all, development for all) and does not discriminate between people and nor does it indulge in any appeasement politics.

He also gave power connection certificates to ten BPL card holders for free saying the UP government will provide free electricity to the poor who remain without electricity till date.

Taking a dig at the Congress, Adityanath said that even Apna Dal has even become larger than the Congress party, which would be unable to win any seat in future elections.