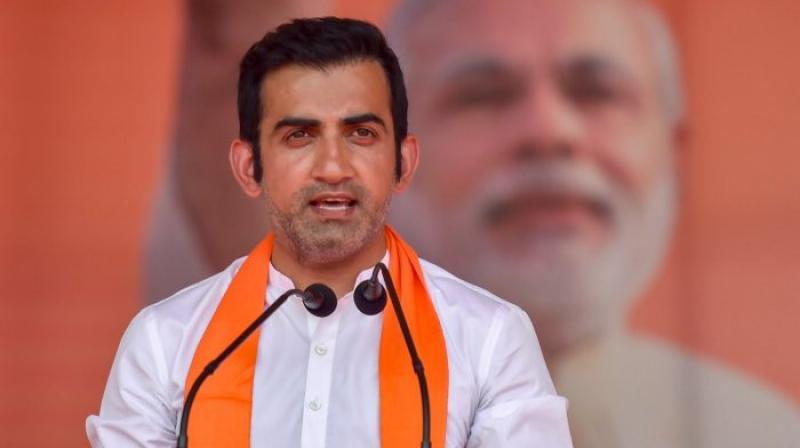 The bench said it was again mentioning that Gambhir did it with a good intention. (Photo: PTI/File)

New Delhi: The Gautam Gambhir Foundation has been found guilty of unauthorisedly stocking, procuring and distributing Fabiflu medicine to COVID-19 patients, the Delhi government's drug controller informed the Delhi High Court on Thursday which said the BJP MP did a lot of charity but caused a lot of shortage of drug and inconvenience to the society.

The high court deprecated the manner in which a huge quantity of the drug was procured and said genuine patients who needed the medicine at that particular time could not get it as the bulk stock was taken away by cricketer-turned-politician Gambhir.

Firstly, you do charity for charity. Doing charity for some other reason is no charity. We want to curb this practice and for this, we want you (drug controller) to take action, a bench of Justices Vipin Sanghi and Jasmeet Singh said.

The drug controller also submitted that action will be taken without delay against the foundation, drug dealers as also in other such cases which would be brought to its notice.

AAP MLA Praveen Kumar has also been found guilty for similar offences under the Drugs and Cosmetics Act and action will also be taken against him, the court was informed.

The counsel for drug controller also said that show cause notices have been issued to licensees under the Drugs and Cosmetics Act as well as those who were found to have breached the law and their responses are awaited.

The court asked the drug controller to file status reports on further progress in these cases within six weeks and listed the matter for hearing on July 29.

The high court was hearing a PIL seeking lodging of an FIR on the allegations that politicians are able to procure and distribute in huge quantities the COVID-19 medicines even as patients were running from pillar to post to get them.

An application was also filed in the pending petition making allegations against Kumar.

The bench said it was again mentioning that Gambhir did it with a good intention and has also spent a lot of money and procured the medicines in a public spirit but at what cost?

He did a lot of charity no doubt but he caused a lot of shortage of the drug and inconvenience to the patients, it said.

Regarding individuals who had to purchase medicines or oxygen cylinders or concentrators in black market at exorbitant rates, the bench said it does not want to go after them even though it constitutes an offence as people were driven to breach the law due to unavailability of resources.

We are of the view that looking into the acute shortage of medical oxygen during the current wave of the pandemic and acute shortage of oxygen beds in hospitals, though procurement of medical oxygen cylinders for personal use would also tantamount to breach of law, such cases need not be pursued and the endeavour of the drug controller should be on such violators whose actions resulted in choking of the system, including medical oxygen, for bona fide use in the treatment of COVID-19, the bench said.

The court, which on earlier occasions had pulled up the drug controller for not conducting a proper enquiry as to how Gambhir got the huge quantities of Fabiflu, said it is good that this aspect has been now enquired.

Whatever breach has been done under the Act, you are bound to take action and continue the enquiry. Everyone should be painted in the same colour and adopt same yardstick for everyone, the bench said, asking the drug controller to also examine other instances and take action.

The court was told that in the recent past Gambhir and Kumar were questioned and also the dealers who had sold an oxygen cylinder to unlicenced firm GGF.

It is established that GGF do not hold requisite drug licence for purchase or stock or distribute drugs. It has been found that GGF was unauthorisedly procuring, stocking and distributing drug Fabiflu under the Drugs and Cosmetics Act un a manner which was not permissible under the law. GGF has committed an offence punishable under the Act, advocate Nandita Rao, representing the drug controller, said while reading out the status report.

The court had earlier said that the drug controller cannot take it for a ride if it thought that the court was so gullible, so naive, it was not.

The court had taken strong exception to the drug controller's report, which concluded that the dealers had ample stock to supply to others, and said everyone knows that the medicine was in short supply and while Gambhir bought thousands of strips of the medicine, other people who needed it could not get it on that day.

It had questioned how could such a large stock of drug, that is, 2,628 strips of Fabiflu be given to a foundation which was neither a medical practitioner nor has a licence.