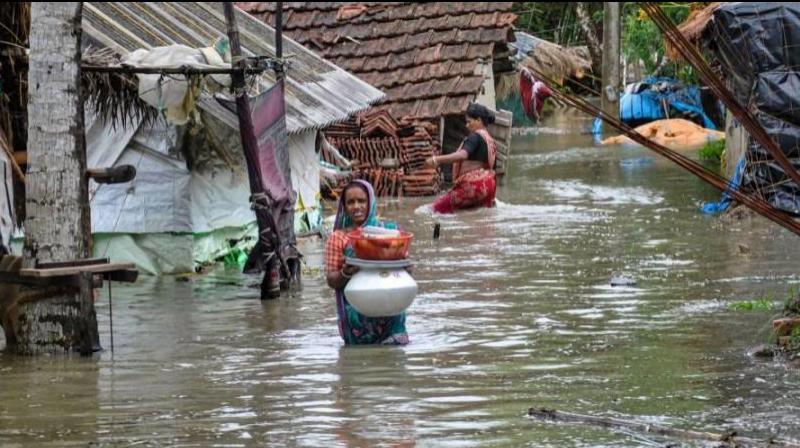 A woman wades through a water-logged road in a village after landfall of cyclone Yaas, in South 24 Paragnas. (Photo: PTI)

Bhubaneswar: Odisha Chief Minister Naveen Patnaik on Thursday reviewed the damage caused by cyclone Yaas in the state and the ongoing restoration work in the affected areas.

He said, "The administration had achieved zero casualties' target. A total of 60 lakh people in 11,000 villages were affected due to the cyclonic storm and it has caused the infrastructure damage of worth Rs 610 crore, including the damage of government infrastructure worth Rs 520 crore and personal assets worth Rs 90 crore."

Jena stated that Rs 66 crore is needed for the relief distribution work.

Highlighting the effect on agriculture, Jena said "The saltwater flooding in the coastal area of cyclone-affected districts has created problems for the upcoming Kharif crop. Scientists from the Odisha School of Agriculture and Technology and the Central Rice Research Center have been asked to study the effects."

"These scientists are currently in the affected areas and are investigating the situation and reports will be forthcoming soon," he added.

Meanwhile, the Chief Minister directed the officials to ensure the documentation of the pre-cyclone preparedness, evacuation, impact of cyclone Yaas, post-cyclone measures including subsequent restoration work by the administration.

Patnaik stated that it will help the government in the future to manage the storm and its effect."

The review meeting was held with senior government officials and district collectors.