According to Bihar Chief Minister, more than 5 Lakh guest workers are still staying in various quarantine centres of Bihar 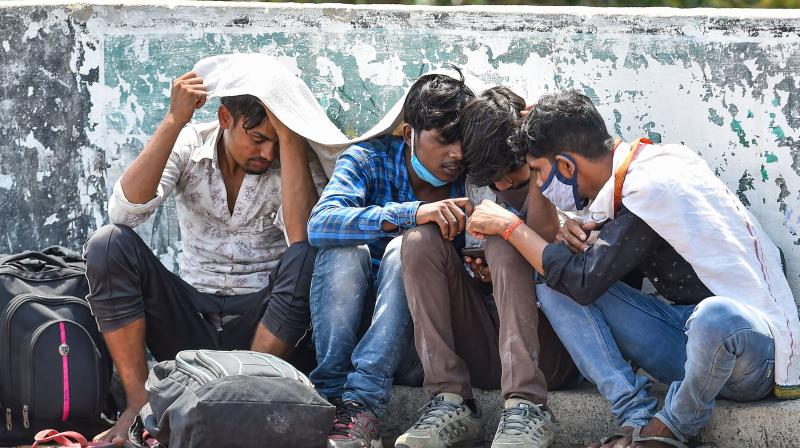 Migrants workers from Assam, Bihar and West Bengal wait at a roadside near Central Railway Station for arrangement to return to their native places, during ongoing COVID-19 lockdown, in Chennai. PTI Photo

Patna: With over 4000 coronavirus cases and 26 deaths, the Bihar government is taking preventive measures to deal with the crisis in the state.

On Wednesday while addressing Panchayat and local body representatives through video conference, Chief Minister Nitish Kumar said that the state government has been trying to provide relief to people who have returned and are living in quarantine centres.

Giving out details and figures he said that, “We have spent around Rs. 5300 on each person who was quarantined in the centres which have been set up at blocks and Panchayat in Bihar. Officials have also been asked to increase the capacity of beds at isolation centres”.

According to Bihar Chief Minister, more than 5 Lakh guest workers are still staying in various quarantine centres of Bihar.

As per an assessment, more than 30 Lakh guest workers have returned to Bihar after the countrywide lockdown was imposed by the centre in March.

A large number of such workers have lost their jobs and now hoping to find a livelihood in Bihar.

The Bihar government had earlier planned to provide relief to the state’s workforce and returning workers under the MNREGA scheme but in May after consulting administrative officials and taking stock of the scenario Chief Minister Nitish asked them to carry out skill survey of the guest workers.

During his address, he assured them that the state government was working on a policy to provide job opportunities for them in their home state of Bihar.