The RJD MLA from Gaighat constituency demanded Tejashwi Yadav’s resignation as the leader of Opposition in Bihar Assembly on moral grounds. 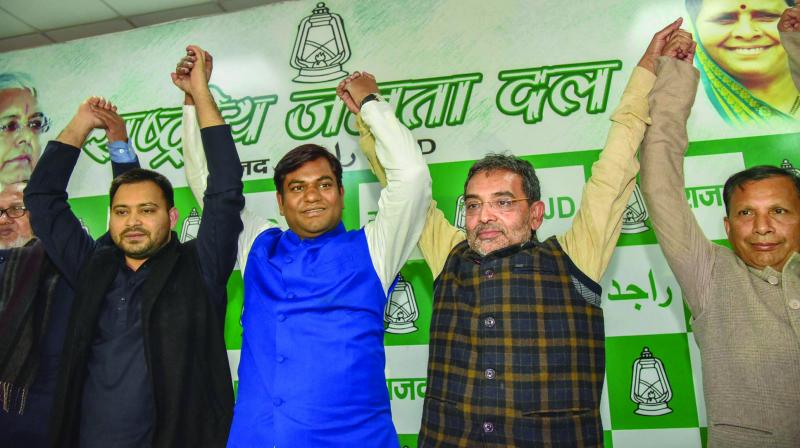 A file photo of regional leaders before the setback in the 2019 Lok Sabha election.

Regional leaders like Tejashwi Yadav, Upendra Kushwaha, and Jitan Ram Manjhi who were aspiring to play a crucial role in Bihar politics suffered a major setback. While these leaders have called for introspection at the organisational level, political analysts do not rule out a possibile  split in their parties.

Patna: The 2019 Lok Sabha election has turned out to be a major setback for regional leaders like Tejashwi Yadav, Upendra Kushwaha, and Jitan Ram Manjhi who were aspiring to play a crucial role in Bihar politics.

While these leaders have called for introspection at the organisational level, political analysts do not rule out the possibility of a split in their parties after they suffered a humiliating defeat during recently concluded Lok Sabha polls.

The immediate fallout of the result was seen when the RJD MLA from Gaighat constituency demanded Tejashwi Yadav’s resignation as the leader of Opposition in Bihar Assembly on moral grounds.

“Tejashwi Yadav should resign as the leader of the Opposition on moral grounds after the party’s humiliating defeat in the Lok Sabha election,” RJD leader Maheshwar Yadav said.

Questions were also raised by other senior RJD leaders who claim that conflict between Tejashwi and his elder brother Tej Pratap created confusion among the voters which could be one of the reasons for the party’s poor performance.

“Many wrong decisions were taken before the polls by the party,” senior RJD leader Raghuvansh Prasad Singh told reporters in Patna after party’s internal assessment meeting on Tuesday.

The dissent in the RJD has been brewing since Lalu Yadav handed over the reins of the party to his younger son Tejashwi Yadav. Senior party leaders are miffed at having been “overlooked” and a rank newcomer with little political experience being given control of the party.

The NDA comprising the BJP, JD(U) and LJP won 39 out of 40 seats in Bihar. The Congress managed only Kishanganj seat while RJD, HAM, RLSP, and VIP failed in saving their electoral space after the poll results.

Earlier this week, former Bihar chief minister and HAM chief Jitan Ram Manjhi had said, “The NDA used surgical strikes and nationalism issue to gain in the Lok Sabha elections. But the Mahagathbandhan couldn’t handle these issues and failed in convincing the voters.”

However, the RJD on Tuesday claimed that “the party sees a conspiracy in the poll result and would never accept it as people’s mandate”. A three-member panel comprising senior RJD leader Jagdanand Singh, Abdul Bari Siddiqui, and Alok Mehta has also been constituted to assess the results.

“Our three-member panel will interact with workers at the booth level to find out the reasons for our poor performance in the elections,” senior RJD leader Jagdanand Singh said.

Mr Manjhi is also likely to chair a meeting of his party, Hindustani Awam Morcha, to analyse the humiliating defeat of Mahagathbandhan. Jitan Ram Manjhi and RLSP chief Upendra Kushwaha who were seen as strong leaders of their community had contested from two seats, but were defeated by the NDA candidates.

“We must analyse every aspect which led to out defeat in the polls. I believe that besides the EVM issue, we must also find out why we couldn’t convince our voters,” Jitan Ram Manjhi said.

RLSP chief Upendra Kushwaha also suffered a setback recently when all three of his party legislatures joined the JD(U).

Revolt in RLSP began after Upendra Kushwaha had walked out of the NDA in December last year over the seat-sharing differences with the BJP leadership. In the last six months, several senior party leaders, including two MLAs, Lalan Paswan and Sudhanshu Shekhar, and MLC Sanjiv Singh Shyam have left the party.

These leaders had announced that they would remain with the coalition and seek recognition from the Election Commission as the real Rashtriya Lok Samata Party.