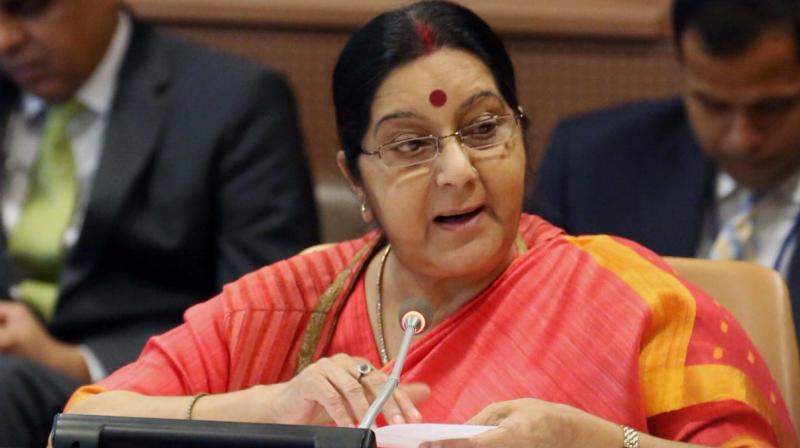 New Delhi: External affairs minister Sushma Swaraj left for a five-day visit to South Africa to participate in the Brics (Brazil, Russia, India, China and South Africa) foreign ministers’ meeting and chair the IBSA (India, Brazil, South Africa) foreign ministers’ meeting there. She will also participate in events there in memory of Gandhiji’s struggle against racism in South Africa. During her visit there, commemorative stamps on saffron ideologue Deen Dayal Upadhayay will also be released.

“External affairs minister (EAM) Sushma Swaraj will be visiting South Africa from June 3-7, 2018. During the visit, the external affairs minister is expected to have meetings with top leadership of South Africa. The EAM will participate in the Brics foreign ministers’ meeting on June 4, 2018 and chair the IBSA foreign ministers’ meeting. On the June 6, EAM will visit the Phoenix Settlement, a South African Heritage site, marking the place that served as Gandhiji’s home and where he developed his philosophy of non-violence,” the MEA said in a statement.

“She would also participate in a series of events on June 6-7, 2018 at Pietermaritzburg, South Africa to commemorate the 125th Anniversary of the historic incident in the train compartment that became a catalyst for Gandhiji’s Satyagraha movement. The two-day commemoration activities will also include release of joint commemorative stamps on Oliver Tambo and Pt Deen Dayal Upadhayay and a Youth Summit where 20 diaspora youth from Africa and 5 from India will participate to speak on the relevance of Gandhiji’s message of peace to the youth of today,” the MEA added.

The 1893 incident proved to be a turning point in Gandhi’s fight against racial discrimination in South Africa.

“The year 2018 is an important year for India-South Africa relations as it marks the 25 years of the establishment of diplomatic relations, the 125th anniversary of the Pietermaritzburg railway station incident and the 100th birth centenary of South African iconic leader Nelson Mandela. India and South Africa enjoy close and friendly relations which are rooted in our history and the values of south-south cooperation. The visit of EAM will further strengthen our close and long standing ties with South Africa,” the MEA said.