India   All India  03 Jun 2017  Clashes between forces, protesters in Kashmir
India, All India

Clashes between forces, protesters in Kashmir

Security forces used batons and lobbed tear smoke shells to disperse them, leading to clashes between the two sides. 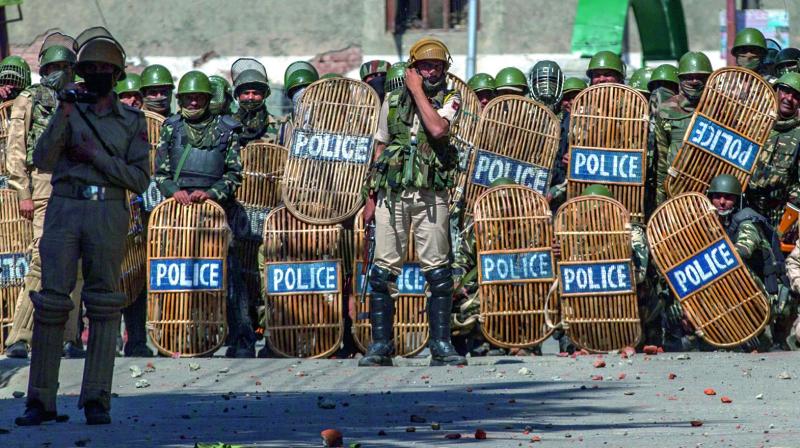 Srinagar: Clashes broke out between protesters and security forces in at least three areas of Kashmir after Friday prayers.

A group of youths started shouting pro-freedom slogans at Nowhatta after Friday prayers ended at the historic Jamia Masjid.

Security forces deployed to maintain law and order used batons and lobbed tear smoke shells to disperse them, leading to clashes between the two sides, a police official said. He said the protesters threw stones at security forces. Also, violence erupted in Sopore town in Baramulla district and Sherbagh area in Anantnag district, the official said.

No casualties were reported in any of these incidents. The top brass of the Army on Friday concluded its security review and operational preparedness meetings spanning over two days in the Kashmir Valley.

He said at the meetings, the Army top brass was briefed about the security situation along the Line of Control (LoC) and counter-insurgency operations in the hinterland.

They were also briefed about the counter-insurgency grid and preparedness of the armed forces to deal with any “misadventure” from across the LoC. The Army top brass was also briefed about the recent operations of the force, including repelling an attack of the Pakistani army’s Border Action Team (BAT), foiling of a major infiltration bid in Uri sector on May 27 and killing of Hizbul Mujahideen commander Sabzar Bhat on the same day, the official said. A large number of weapons including AK-47s, self-loading rifles (SLR) and INSAS rifles, were snatched by militants in Jammu and Kashmir in last one year.