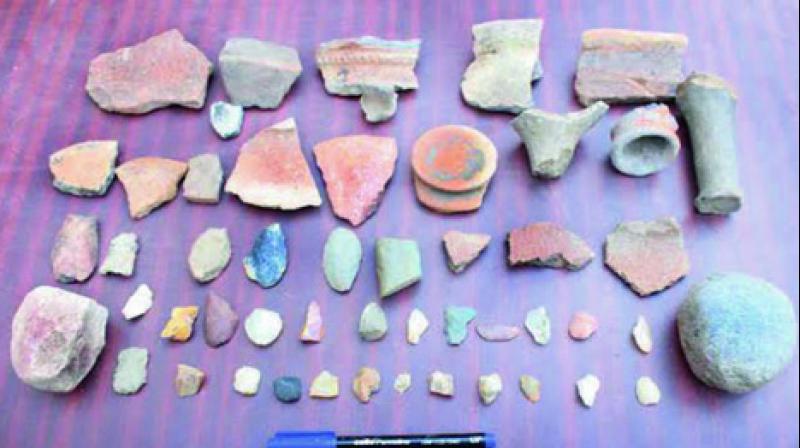 Recently, the university researchers discovered items from the 4,500-year-old civilisation on the shores of Chilika lake.

Bhubaneswar: The students of Utkal University have discovered the stone tools and weapons of 4,500-year-old civilisation at various locations in Khurda district.

A team of researchers led by Assistant Professor Anam Behera of the department of ancient Indian history, culture and archaeology of Utkal University, comprising two students, Kaibalya Charan Pati and Biswajit Behera, have unearthed the stone tools belonging to Copper Stone Age at Mukundaprasad, Moulibandh of Keranga and Dianparbati of Podaput in the district.

The stone fragments (Khapara) of different colours found from Balukeswar (Mukun-daprasad) indicated the existence of Copper Stone Age, which is of 4,500-year-old. Similarly, the stone weapons, stone fragments, dish on stand, plain round stones were discovered near a nullah passing through Moulibandh in Keranga. The team also found similar items in Dianparbati area of Podaput.

Experts say the places belong to three variants of civilisation in the cultural context. While the weapons made of tiny stones can be regarded as the items of Stone Age, the plain stones and rope-mark stone fragments discovered from the site are of the New Stone Age, which is 10,000-year-old in Japan, 6,000-year-old in Thailand and 8,000-year-old in Baluchistan of Pakistan.

Recently, the university researchers discovered items from the 4,500-year-old civilisation on the shores of Chilika lake. A few weeks ago, the Utkal University students had discovered an ancient idol of Lord Buddha with seven-head snake from Govindapur area near Banapur in Khurda district.