Go, corona, go: In Telangana, if you close your eyes, corona will go away 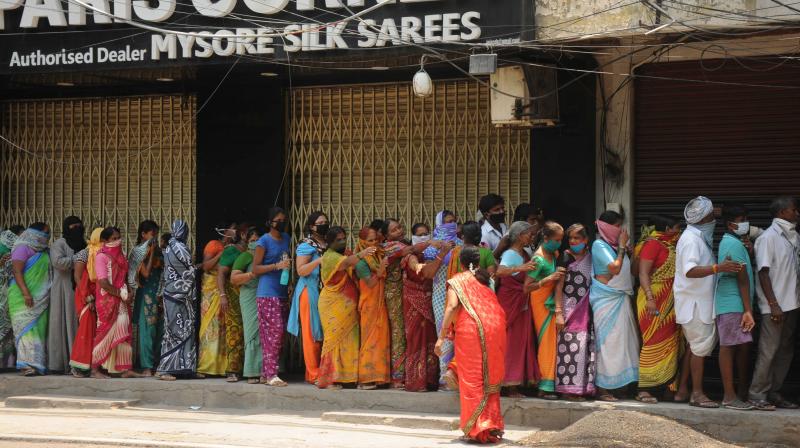 Social distance norms continue to thrown to the wind in Hyderabad whenever free rations are distributed. In this picture, women jostle to receive free rations from the Baptist Church at Shanthi theatre in Hyderabad. (DC Photo: Deepak Deshpande)at a

Hyderabad: According to data obtained from the Indian Council for Medical Research (ICMR), Telangana carried out 4,035 tests for coronavirus infection between April 19 and 26.

On April 21, in a decision that defies logic, the Telangana government decided not to test anyone without Covid-19 symptoms or those who are not primary contacts of Covid-19 patients.

Any wonder then that it was also in the last week of April that the state began reporting new daily cases in the single digits?

Based on these figures, the government began expressing the hope that the spread of the virus was being contained.

ICMR oversees the testing process across the country. We obtained testing figures from ICMR and correlated them with the number of positive cases detected in Telangana.

In the initial days in Telangana, between March 10 and 22, the number of tests conducted 180 . This number rose dramatically rose to 4,781 between April 5 and 11. That, according to data received from ICMR, was the highest number of tests done in a week in Telangana.

In the period during which the state conducted the most tests, as per ICMR data, the number of positive cases, according to the patient list provided by the state, was found to be 241.

The next testing period for which ICMR provided data, April 12-18, was the also period during which Telangana discovered the most number of positive cases, 322.

The government says it will stick to ICMR guidelines on testing. And anxieties over the shrinking circle of testing continue to rise.

In a recent interview, the director for the Centre for Cellular and Molecular Biology (CCMB), Dr. Rakesh K. Mishra, said the importance of testing cannot be ignored and called for sustained testing to determine the extent of the spread of the disease.

His concerns reflect those of many other doctors here as well as the World Health Organization which has repeatedly stressed on increasing the rate and pace of testing to determine the true extent of the spread of the virus in the population.