India   All India  03 May 2019  SIT hunting for 2 conspirators in Kalburgi killing
India, All India

Kalburgi was shot dead on August 30, 2015 by two motorcycle borne assailants, who entered his house in Dharwad posing as students. 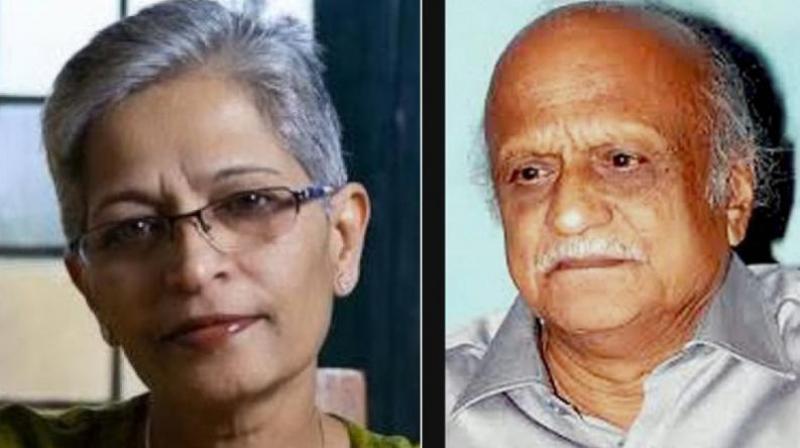 Bengaluru: The Special Investigation Team probing the killing of rationalist M M Kalburgi is hunting for at least two persons directly involved in the crime, sources in the SIT said Friday. Kalburgi was shot dead on August 30, 2015 by two motorcycle borne assailants, who entered his house in Dharwad posing as students.

The criminal investigation department was investigating the case. However, the Supreme Court hearing a petition by Kalburgi's widow Umadevi ordered in February this year that the SIT, which cracked journalist-activist Gauri Lankesh murder case, should investigate this as well as there were similarities between the two killings. Investigating officer in the SIT, M N Anucheth, refused to divulge any detail except for saying they have startedinvestigation.

While probing the Lankesh murder case, the SIT arrested 16 people belonging to an organised gang of right wing people but two are still at large. SIT suspects that a few members of the same ring were also involved in Kalburgi's murder.

According tothe SIT, Parashuram Waghmare was the hitman while Ganesh Miskin rode the bike. Two other rationalists Narendra Dabholkar and Govind Pansare were also killed in a similar way in Maharashtra and investigating agencies suspect that all the cases were interconnected.

SIT officials suspect the involvement of Miskin in Kalburgi's murder.

Waghmare and Miskin are among the arrested.