India   All India  03 May 2019  Odisha braces for Fani landfall
India, All India 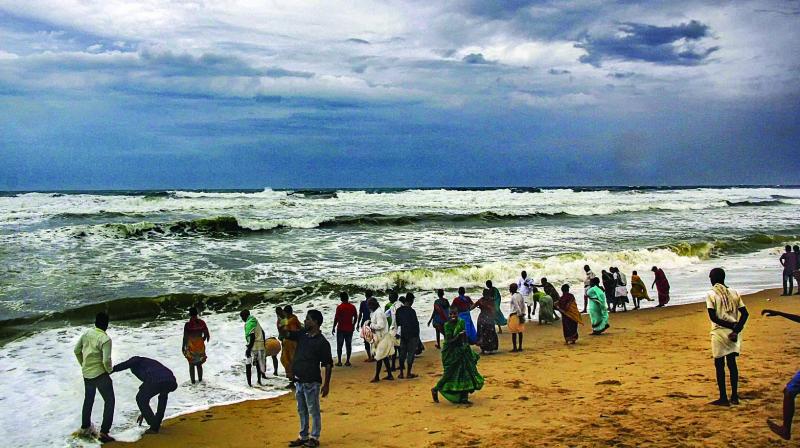 Villagers at the beach as dark clouds hover above the sea ahead of cyclone Fani in Puri on Thursday. (Photo: PTI)

Bhubaneswar: Packing intense severity and fury, cyclonic storm Fani is steadily advancing towards Odisha coast, causing serious panic among locals in at least 13 coast districts. Categorised as Extremely Severe Cyclone (ESC), the storm was 295 km away from pilgrim city of Puri on Thursday evening and was hit to the coast on Friday morning.

Prime Minister Narendra Modi on Thursday held a meeting to review the preparedness to counter the cyclone. Over 4,000 specialised personnel as part of 81 NDRF teams have been deployed to deal with the “extremely severe” cyclone. While the Indian National Centre for Ocean Information Services (INCOIS) in its latest model predict landfall of ‘Fani’ in between Chilika and Puri Friday morning, the Joint Typhoon Warning Centre (JTWC) has also pointed out the same range of places as point of landfall and hinted the landfall time as before 8 am on Friday. The India Meteorological Department K.J. Ramesh said the landfall will happen between 11 am and 4 pm near Puri.

The wind speed, as per forecast, may gust to 243 km per hour during landfall. As per JTWC model prediction, the maximum wind speed in cities like Bhubaneswar, Berhampur and Cuttack could be around 100-115 km per hour in the next 12 hours (means staring from around Thursday midnight). The model further hinted at a wind speed of around 50km/hr in far off places like Nayagarh, Aska, Gunpur, Gajapati and parts of Dhenkanal from midnight to landfall time. Post landfall and when Fani will be moving over the coastal districts of Jagatsinghpur and Balasore, before entering West Bengal, the wind speed in parts of Cuttack and Jajpur districts will see equally squally winds reaching up to 100 km/hour.

Fearing high sea ingress, the state government has set a target to evacuate over 11 lakh people from the coastal districts to safer places. Till May 2 evening, nearly 4.5 lakh have been evacuated, informed SRC officials. However, as of now, maximum population evacuated is from Gajapati.

As many as 12 IAS officers and 11 IPS officers have been engaged in vulnerable districts. The brunt of Fani will be borne by districts like Ganjam, Khurda, Puri, Jagatsinghpur and Kendrapara.