PM Narendra Modi announced that Centre has released Rs 1,000 crores to Odisha and other states to deal with the devastation caused by Fani. 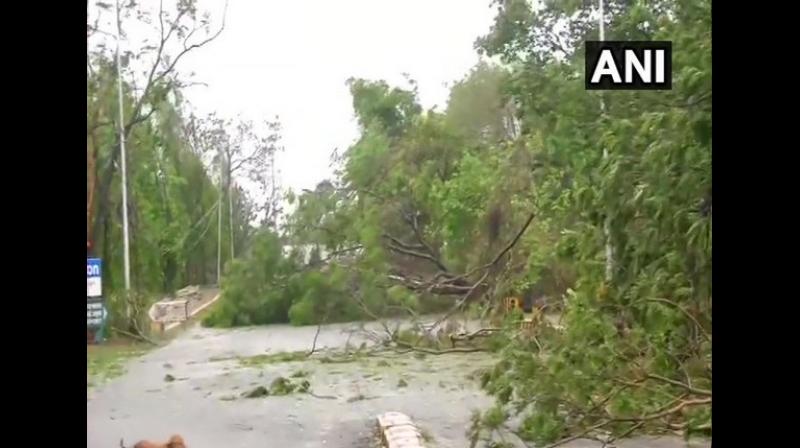 The cyclone, the worst April storm in 43 years, caused 'huge damage' in Bhubaneswar, Cuttack, Puri and Khordha districts in the state, according to the Odisha government. (Photo: ANI)

The impact of the "extremely severe cyclonic storm", which made landfall close to the temple town of Puri between 8 a.m and 10 a.m. was also felt in parts of West Bengal, including the beach town of Digha, and Andhra Pradesh.

The cyclone, the worst April storm in 43 years, caused "huge damage" in Bhubaneswar, Cuttack, Puri and Khordha districts in the state, according to the Odisha government.

Prime Minister Narendra Modi announced that the Centre has released Rs 1,000 crores to Odisha and other states to deal with the devastation caused by Fani.

"As of now, three persons have lost their lives in the cyclone. The precautions that have been taken should be continued," Pradhan told ANI.

A state government statement said, "There is extensive damage to dwelling houses. Almost all kutcha and old pucca have been fully or severely damaged."

The cyclone caused damage to telecom towers resulting in failure of cellular and land-line telephone networks in several areas including capital Bhubaneswar. "All telephone and cell phones are down in Puri district," the statement said.

Large-scale devastation has also been caused to summer crops, orchards and plantations, it added.

The storm caused extensive damage to AIIMS Bhubaneswar with several overhead water tanks and a part of the roof getting blown away. Union Health Secretary Preeti Sudan said.

Strong winds uprooted several electricity poles on the campus. However, all patients, staff and students are safe. "We have enough supply and are ready to support the state," Sudan said.

Massive waves along the Bay of Bengal coast in the state inundated low-lying areas in Ganjam. Khordha, Puri and Jagatsinghpur districts.

A large crane at an under-construction building site fell on the buildings nearby but there was no indication whether there were any human casualty.

The office of Odisha Chief Minister Naveen Patnaik posted on Twitter that over 11 lakh people from the vulnerable regions have been evacuated since Thursday.

Over 3 lakh people were evacuated from Ganjam district alone, followed by 1.3 lakh from Puri district. Around 5000 kitchens are operating to serve people in shelters.

A 60-year-old reportedly died in a shelter home in Kendrapara following a heart attack.

The cyclone weakened into a "very severe cyclonic storm" after landfall.

"Everything is flying in Air ..have literally turned deaf because of wind sound ..All window panes were broken..difficult indeed ..if this is my condition in a concrete building ..I pray for the lives of millions," tweeted BJP leader Sambit Patra who is contesting the Lok Sabha election from Puri.

"The process of landfall of #CycloneFani has begun ..extremely high wind speed ..heavy rain ..the harrowing sound ..reminds me of 1999 Supercyclone With folded hands I pray to Lord Almighty Jaganath ji to give us the strength to endure this," he said.

Civilian air services have been suspended from airports in Odisha and Kolkata while nearly 225 trains cancelled including 56 on Friday.

Indian Navy's P-8I and Dornier aircraft are scheduled to undertake an aerial survey to assess the extent of impact and devastation caused by the cyclone.

Helpline number - 1938 - has been made operational by Ministry of Home Affairs (MHA).

West Bengal Chief Minister Mamata Banerjee on Friday took to Twitter, saying that she has cancelled all her election rallies till May 5 in her state.

As Fani continues to move north-northeast, it is likely to further weaken into a "severe cyclonic storm".

National Disaster Response Force teams deployed in Digha, West Bengal, has evacuated nearly 150 people including children from Dattapur and Tajpur to a shelter.