PM Narendra Modi told gathering that nation should celebrate Mahatma Gandhi's anniversary next year 'in action' and not through tokenism. 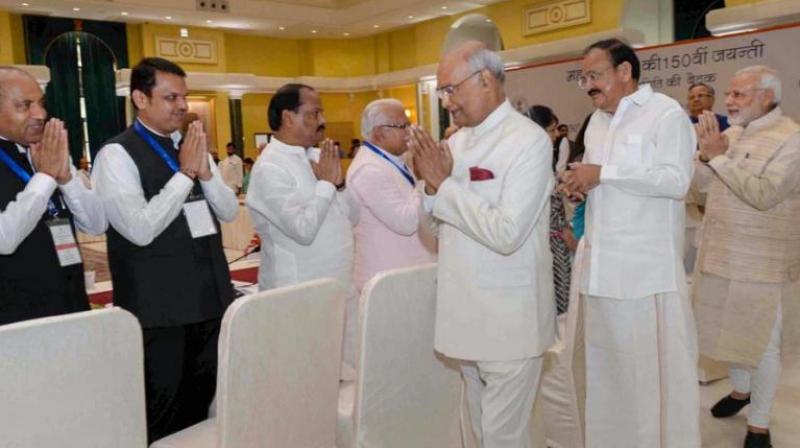 Leader of the Opposition in the Rajya Sabha Ghulam Nabi Azad, former Prime Minister Manmohan Singh and BJP veteran LK Advani were among those who attended the first meeting of the 'national committee', sources in the government said. A total of 23 chief ministers, including those from West Bengal, UP, Bihar, Jammu and Kashmir, Tamil Nadu, Puducherry, Madhya Pradesh and Chhattisgarh attended the meet, where a blueprint to mark the occasion was discussed.

The celebrations are to begin on October 2 this year and continue till October 2, 2020. Chairing the meeting, President Ram Nath Kovind said Gandhi's principle of 'Ahimsa' (non-violence) is very relevant today with the world facing terrorism and other forms of violence.

"Mahatma Gandhi was India's conscience keeper. The Mahatma is our past, he is our present and he is also our future," the president said.

According to sources, Prime Minister Narendra Modi told the gathering that the nation should celebrate the anniversary of Mahatma Gandhi next year "in action" and not through tokenism.

PM Modi said that it is not enough to just pay homage to the leader but the government should ensure that he lives amongst the people, sources said.

The prime minister said Gandhi's works have to be imbibed in life so that generations to come remember him and the celebration should be in the form of a 'jan andolan' (mass movement).

After the meeting, Modi tweeted, "Mahatma Gandhi gave his life for the nation. He led a movement due to which our generations can breathe the air of freedom and have the privilege of living in a vibrant democracy."

"We should ensure more and more people across the world know about Bapu's greatness," he said in another tweet.

Sources quoted Azad as having said in the meeting that schools should have a curriculum based on non-violence and proposed an award for fearless journalism.

External Affairs Minister Sushma Swaraj said that her ministry was planning to hold celebrations in 193 countries across the world and there will be one common programme at different venues.

Jammu and Kashmir Chief Minister Mehbooba Mufti proposed that the 150th year of Gandhi's birth should be celebrated as the year of peace and reconciliation. She said that should be use of internet and social media to engage with youth on non-violence.

West Bengal Chief Minister Mamata Banerjee was of the view that the celebrations should begin this year itself and should go on for two years. She said the state government has already formed a committee to plan events for the occasion. She suggested that a world peace convention be held in West Bengal, the sources said.

Bihar chief minister Nitish Kumar said that he has already started 'Bapu aapke dwar' (Gandhi at your doorsteps) to take the message of Gandhi to every household of the state.

"Happy to participate in the first meeting of National Implementation Committee for Commemoration of 150th Birth Anniversary of Mahatma Gandhi at Rashtrapati Bhavan, today. Meeting was chaired by the Hon'ble President & had meaningful and valuable discussions," Vice President Venkaiah Naidu, who is part of the committee, tweeted after the meeting.