India   All India  03 May 2018  National Film Awards amid row over President not giving all accolades
India, All India

National Film Awards amid row over President not giving all accolades

In a break from tradition, Union Information and Broadcasting Minister Smriti Irani presented most of the awards. 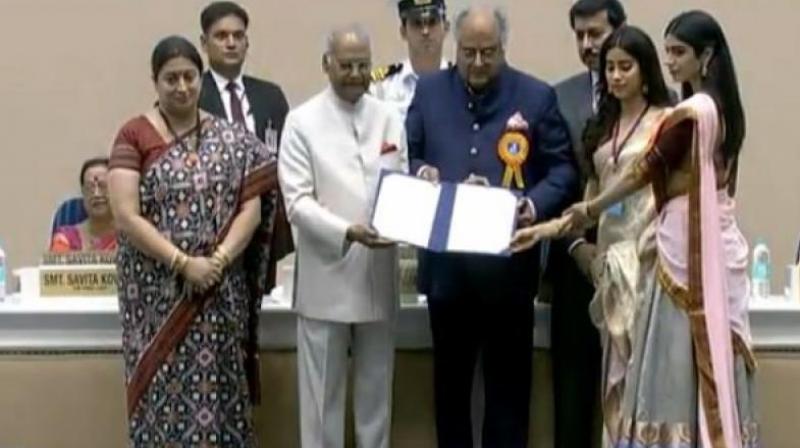 New Delhi: The 65th National Film Awards 2018 were handed out on Thursday at a ceremony at Vigyan Bhawan in New Delhi amid protests by winners who were angry about not receiving the prestigious honour from the President.

Nearly 80 winners had threatened to skip the ceremony after getting to know that only 11 awards will be presented by President Ram Nath Kovind.

In a break from tradition, Union Information and Broadcasting Minister Smriti Irani presented most of the awards.

Filmmaker Meghnath who did not accept the award, said, "President should present us the award. That is our right. It is a tradition of President giving the award. It takes years to make a film. And it takes a minute for the President to present the award."

"We are not commercial filmmakers. They are breaking a tradition of 65 years. They could have told us in advance, we would not have come here," Meghnath added.

The artistes wrote an impassioned letter addressed to the President and the government, where it was stated, “...at the end of the day we feel dejected rather than honoured for our work.”

The President’s office expressed surprise over the ‘11th hour protest’, saying it is known that the President attends all award functions for a maximum of an hour.

“This has been the protocol since he took office. It was conveyed to Information and Broadcasting Ministry several weeks ago and the ministry knew this all along," said Ashok Malik, press secretary to the president.

The 11 chosen for the President's segment included Vinod Khanna and Sridevi, who have been honoured posthumously.

President Ram Nath Kovind also presented the National Award for best actor (female) to Sridevi (posthumously) for the movie 'MOM'. The award was received by her husband Boney Kapoor and daughters Janhvi and Khushi Kapoor

Earlier, the award winners had suggested that speeches and other frills be edited from the ceremony so that the President can accommodate more of them.