In search of an ideal Hindu?

Chandragupta Vikramaditya was one of most successful and enlightened Hindu rulers of India. 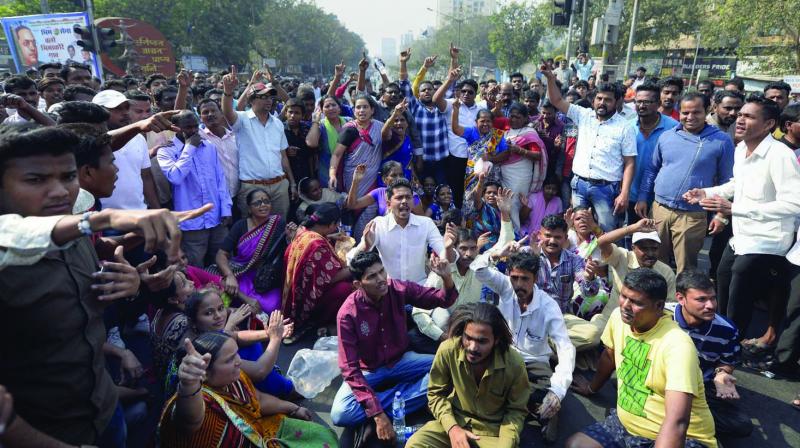 A file photograph of the protests against the violence in the Bhima Koregaon area of Maharashtra recently. (Photo: PTI)

In the preface of his latest book, Why I am a Hindu, Shashi Tharoor spells out why he has written this book to put forward the correct profile of a Hindu as it has been distorted by words and actions of the RSS and the saffron brigade. He has presented a pure, pristine Hindu who is broadminded, liberal, respects all faiths and their practices, believes in gender equality and inclusiveness, and who not only tolerates a contrarian viewpoint but respects it too.

No sane person can find fault with these noble traits. But looking at today’s India, doesn’t it seem too perfect to be true? How many such ideal Hindus do we have? If we apply Mr Tharoor’s parameters strictly to the Hindu society over the centuries, a sizeable number of Indians won’t qualify to be called true Hindus.

Can Dronacharya of Mahabharat, who taught only the princes and princelings and who asked for Ekalavya’s thumb in guru dakshina, though he had never taught him (his action was termed as disgusting by one of the CJIs a couple of years back) be called a Hindu by Mr Tharoor’s definition? Was the gentleman who ordained that molten lead should be poured in the ears of shudras who dared to learn the Vedic scriptures of a Hindu? Didn’t Dronacharya and Manu represent the knowledge society of their times that was totally intolerant of shudra’s aspirations to acquire knowledge and redeem their lot? What was the place of shudras in Hindu society during the rule of the Shungas and the Satavahanas who followed the Brahminical order? Did they enjoy the right to property or the right to education? Didn’t brahmins who controlled access to knowledge and right to perform all rituals to invoke gods and goddesses consider themselves as Avadhya (who couldn’t be awarded capital punishment irrespective of the gravity of crime they committed)?

Chandragupta Vikramaditya was one of most successful and enlightened Hindu rulers of India. Arts, literature and architecture flourished under his rule. However, in the empire of this enlightened ruler, while passing through narrow lanes, shudras were required to use bamboo sticks with tiny bells tied around them to make a sound to warn the people of higher Varnas to keep away lest they got polluted by their shadows!

Yes, the Jews persecuted in Babylonia arrived in India six centuries before the birth of Jesus Christ. Though less than 1,000 in number today, they don’t feel threatened in India of 1.3 billion people. The Parsis, who came from Iran, contribute roughly 19 per cent of India’s GDP though they number less than a million. And we embraced an Albanian nun, called her Mother Theresa and honoured her with the Bharat Ratna, the highest civilian award.

How come in the land of such exemplary generosity and tolerance, we have been treating the low castes in such inhuman manner, sometimes worse than the slaves? In Travancore, the low caste women had to pay tax to cover their breast and to breastfeed their own infants! There is no example of any other country in the world where women were subjected to such taxes.

With the untouchability still being practiced with impunity in hundreds of villages, a couple of million Indians living as bonded labour/child labour, one rape of a dalit woman every 36 minute, dalit bridegrooms having to seek courts’ intervention to ride a horse or an elephant in their own weddings, attacks on dalit for such innocuous things like growing mustaches, shameful incidents like Una, Unnao, Budaun, honour killings, millions of female foeticide, dowry deaths, can India legitimately claim to be a tolerant society? Where has that famed tolerance of Hindus disappeared? Or it always existed more in books than in real life!

Mahmud of Ghazni is believed to have invaded India 17 times with his galloping cavalry all the way from Afghanistan. He looted and destroyed the temple of Somnath among many others. Surprisingly, Hindu kings, supposedly brave, couldn’t defeat him in 17 years. It speaks volumes about the superior military prowess of the invader as well as the deep divisions in Hindu society. At the peak of the British Empire, there were merely 150,000 British nationals in India, including the military personnel. The credit for ruling over such a large country for so long with so few people goes as much to the administrative and military genius of the colonisers as to the Hindu society afflicted with divisions, social hierarchies and lack of an overpowering sense of nationhood.

The Mughals, unlike other invaders, didn’t come here to loot, plunder and go back with their booty; they decided to stay put and establish an empire. And they did. Rest is history. Like their contemporaries world over, they were despotic rulers, ruthless, at times brutal and brooked no opposition in word or action. But they have left behind an enviable treasure of unique monuments and a rich legacy of arts, literature, music, dance, paintings, costumes and cuisine, which have impacted our daily lives and survived for more than four centuries. Weren’t Akbar and Dara Shikoh but not Aurangzeb, who got Ramayan, Mahabharat and Upanishads translated into Persian, the official language of the Mughal court farsighted? Abdul Rahim Khan-e-Khana, who painstakingly mastered Sanskrit and Hindi, wrote poetry about Varanasi, Lord Krishna; his erotic poetry is too graphic for children. Mirza Ghalib also paid glowing tributes to Varanasi. The understanding and respect shown by Bahadur Shah Zafar and Nawabs of Awadh towards Hindu festivals is the stuff of folklores as are Amir Khusrow and Raskhan.

Unfortunately, the bonds of communal harmony and tolerance carefully nurtured over generations were gravely ruptured by the violence and crimes that marked the Partition. Sadly, though 70 years have passed, the wounds of Partition seem to have failed to heal fully notwithstanding numerous triumphs of democracy. Come election time, the minority community’s distrust, controlled anger and feeling of having been wronged is exacerbated by the principal political parties. Mayawati put up 97 Muslim candidates in UP elections last year and drew a blank. The BJP didn’t put up a single Muslim candidate out of 175 million still romped home a huge majority. Wasn’t the message clear?

While a lot of things, which many BJP supporters do, for example, cow vigilantism and asking some members of the minority community to leave India must be rejected, isn’t it a fact that the BJP has forced other parties to underline their own Hindu credentials? After all, the majority of voters are Hindus! Is this the triumph of true Hinduism or the electoral politics?