This is the first National Film Awards Mr Kovind, who became India’s 14th President on July 25 last year, will be conferring.

New Delhi: The 65th National Film Awards ceremony, to be held at New Delhi’s Vigyan Bhavan on Thursday, came under a strange cloud of controversy at the eleventh hour as news spread on Wednesday evening that Rashtrapati Bhavan had told the information and broadcasting ministry that President Ram Nath Kovind wouldn’t be able to attend the entire ceremony due to his “busy schedule”.

Sources said Rashtrapati Bhavan has said that due to President Kovind’s packed schedule, he wouldn’t be able to attend the whole function and had selected 11 awards that he would personally present.

“The President’s House has also directed that the rest of the awards can be conferred by the I&B minister or the MoS,” a source said. They did not say which 11 awards the President was likely to hand over. Mostly awards are given out in ascending order of significance.

However, a Rashtrapati Bhavan source told this newspaper, “It has been a while since President Kovind had decided that apart from major constitutional ceremonies, he will spend a maximum of one hour at all other functions and events, and this was communicated to the organisers of events several weeks in advance, including the organisers of the National Film Award.” 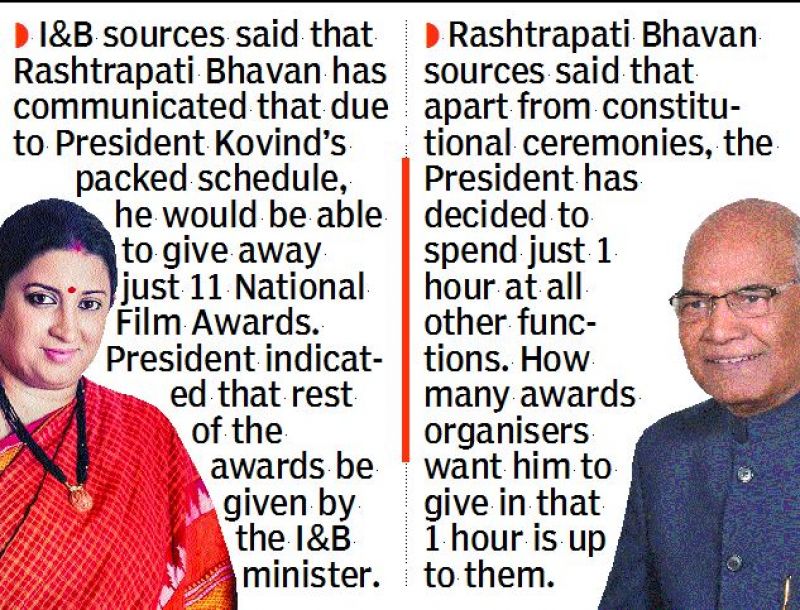 How many awards the organisers want the President to give away in that one hour is up to them, the source said, adding that all this was communicated to the organisers at least three weeks ago.

Nevertheless, the dress rehearsal of the awards ceremony on Wednesday saw agitated award recipients protesting as they suddenly heard the news that President Kovind may not be handing over their awards. They voiced their displeasure to I&B minister Smriti Irani, saying they wanted to receive their award only from the President.

Sources said Ms Irani tried to placate them. “The minister told the award recipients that while she could not direct a change of schedule for the President, their sentiments would be conveyed to Rashtrapati Bhavan,” sources said.

The commotion a day prior to the awards cerem-ony, in the midst of some of India’s best actors, actresses, directors and technicians, carried a whiff of deliberate mischief.

This is the first National Film Awards Mr Kovind, who became India’s 14th President on July 25 last year, will be conferring.

The 65th National Film Awards were announced on April 13, in which the contribution of Vinod Khanna and Sridevi to Indian cinema were recognised by honouring them posthumously with the Dadasaheb Phalke and best actress awards respectively.

Sridevi’s husband and daughter participated in the dress rehearsal on Wednesday.

The juries, both regional and at the Central level, are appointed by the Directorate of Film Festivals in India for selection of the films.

The Dadasaheb Phalke award, the top national honour for the film industry, is presented at the end of the National Film Awards ceremony.