PM Modi, who kick started his campaign blitzkrieg in poll-bound Karnataka on Tuesday, is addressing a rally in Kalaburagi today. 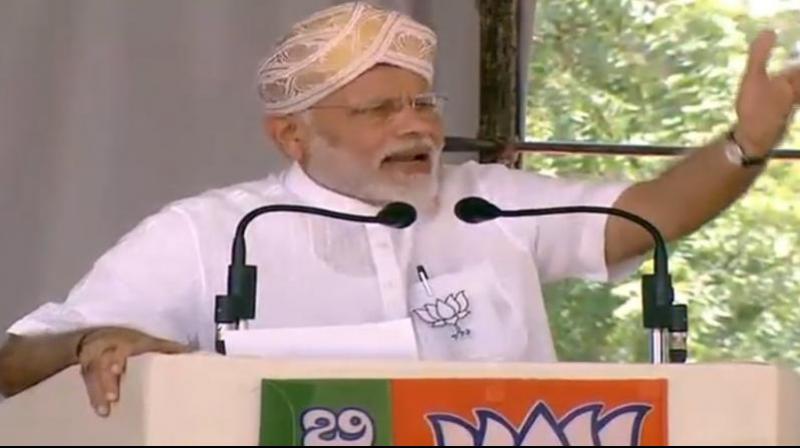 Kalaburagi: Prime Minister Narendra Modi, who kick started his campaign blitzkrieg in poll-bound Karnataka on Tuesday, is addressing a rally in Kalaburagi today. The Prime Minister will address 3 rallies today.

Speaking at a rally in Kalaburagi, PM Modi said, “This election will decide the future of Karnataka. It is about security of women, the development of farmers. Do not assume this is only about electing MLAs, it is much more than that.”

The Prime Minister further said, "Karnataka has a rich history of valour with immortal names like Field Marshall Cariappa and General Thimayya. But, how Congress governments treated them is well recorded in history. In 1948 after defeating Pakistan, General Thimayya was insulted by PM Nehru and then RM Krishna Menon."

Further taking a dig at the Congress, the Prime Minister said, “We have seen the state being ruined for five years and we will no longer allow the state to be ruined further. People are seeing that in all corners of India the Congress is being rejected.”

Accusing the Congress of failing with regard to the agriculture sector, PM Modi said, “Kalaburagi is known for 'Dal' cultivation. Our farmers are working hard here and availing of the benefits of the central government schemes. However, the Karnataka government is insensitive towards the condition of farmers.”

“Congress sat over Swaminathan Commission recommendation to increase Minimum Support Prices for farmers. It's not expected of them to accept this sin but they can at least keep quiet, when our govt has approved its implementation,” PM Modi further said.

Prime Minister Modi also targeted the Congress on going back on its decision to make Mallikarjun Kharge the Chief Minister. "During the last election, Congress promised they will make Kharge Ji CM. They misled the Dalit community. They sidelined Kharge Ji. This is typically how Congress does their politics," he said.