India   All India  03 May 2018  AMU on edge after saffron activists burn Jinnah effigy
India, All India

BJP MP Satish Gautam had written to the AMU vice-chancellor demanding that the portrait of Jinnah should be removed without delay. 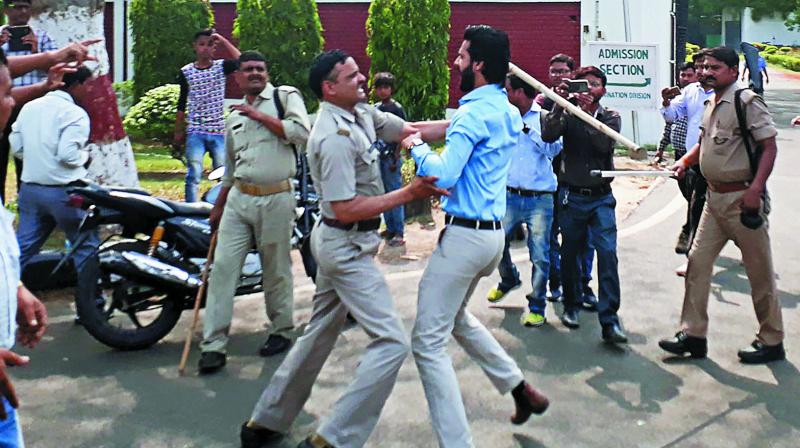 Police personnel try to control the situation after a clash between two groups at Aligarh Muslim University. (Photo: PTI)

Lucknow: Tension prevailed in Aligarh on Wednesday after Akhil Bhartiya Vidyarthi Parishad (ABVP) activists burnt an effigy of Mohammad Ali Jinnah in protest against AMU Students’ Union’s refusal to take down a portrait of the Pakistan founder form their office.

On Tuesday, BJP MP Satish Gautam had written to the AMU vice-chancellor demanding that the portrait of Jinnah should be removed without delay.

According to reports, right wing activists, including activists form ABVP and Hindu Yuva Vahini, entered the AMU campus, shouted slogans against Jinnah and burnt his effigy.

According to the AMU Students’ Union spokesperson, around 15-20 youths wearing saffron “gamchas” entered the campus with pistols and revolvers.

They attacked a student passing by and as news of trouble inside the campus spread, AMUSU leaders and some other students accosted six outsiders and handed them over to the police.

Students allege that half an hour later, the police released the alleged mischief makers and did not register any complaint against them causing the AMU students to protest against the police near the Bab-e-Syed gate inside the campus.

In retaliation the police resorted to lathicharge and firing of teargas shells in which AMUSU president Maskoor Usmani, secretary Mohd Fahad and former secretary Mazin Zaidi were injured and rushed to hospital. Rapid Action Force (RAF) was later deployed in and around the AMU campus.