The Indian troops had killed at least seven Pak soldiers in a retaliatory attack on Pakistani positions on April 17. 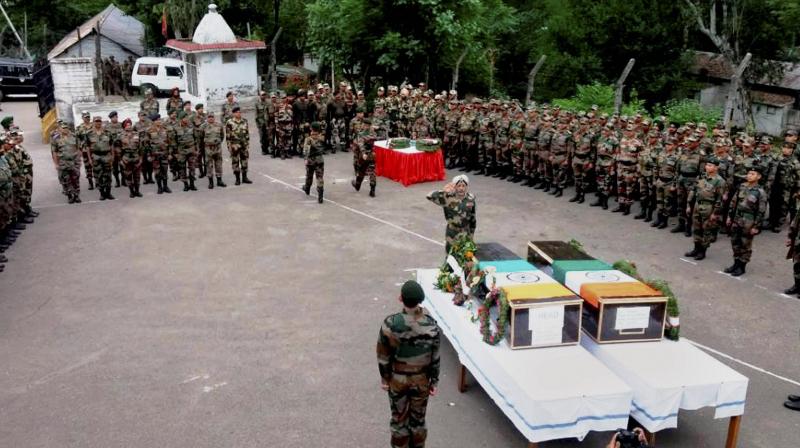 New Delhi: The attack on a  patrol party of the Indian Army in Krishna Ghati sector in Jammu & Kashmir's Poonch district early on Monday by Pakistan’s special forces was authorised by army chief General Qamar Javed Bajwa, who wanted to avenge the killing of at least seven of his soldiers by Indian troops on April 17.

According to a report in The Indian Express, the Pakistan army chief ordered the ambush, in which bodies of two soldiers were mutilated, after local commanders pressed for a retaliatory attack.

Bajwa gave the orders for the ambush following his visit to Pakistani military positions in Haji Pir on April 30, IE quoted Indian intelligence and military sources as saying.

“Ever since the cross-Line of Control strikes that followed the Uri terrorist attack, things haven’t really quietened down” an Indian intelligence official said. “The skirmishing has been costly for Pakistan, and we think it’s trying to show India it is now willing to risk escalation, despite the weakness of its military position on the Line of Control.”

Pakistan’s BAT had entered 250 metres deep inside Indian territory early on Monday, set up the ambush and waited for a long time for the patrol team. It ambushed the Indian Army’s patrol unit under the cover of heavy mortar shelling by Pakistani troops on two forward posts along the Line of Control (LoC) in Poonch district.

“Their target was a patrol party of 7-8 members, which had come out of a post,” an officer told PTI, adding that as the posts were engaged, the patrol team members ran for cover. In the process, two members were left behind and targeted by the BAT.

Head constable Prem Sagar of 200th Battalion of the BSF and Naib Subedar Paramjeet Singh of 22 Sikh Regiment of the army were killed and their bodies mutilated.