India   All India  03 May 2017  Kumar Vishwas not to quit, to be made AAP in-charge in Rajasthan
India, All India

Kumar Vishwas not to quit, to be made AAP in-charge in Rajasthan

Vishwas had threatened to quit if stern action was not taken against Okhla MLA Khan, who had also accused him of being a RSS-BJP agent. 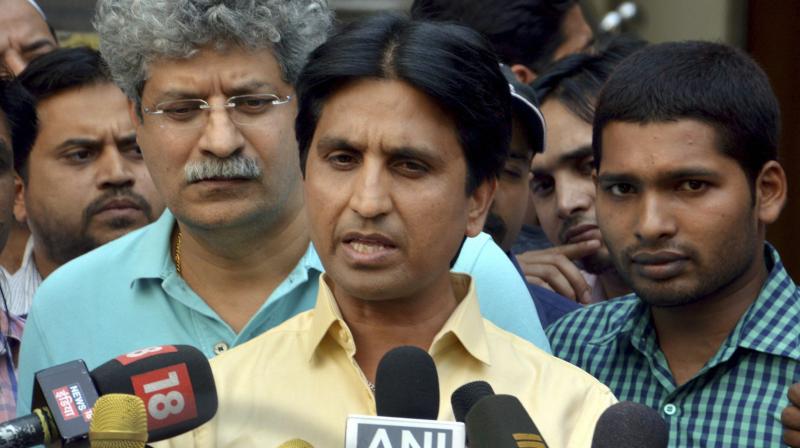 New Delhi: The feud in the Aam Aadmi Party (AAP) seemingly ended on Wednesday after Kumar Vishwas declared his decision to not quit.

According to reports, top party leaders at a meeting on Wednesday morning agreed to take action against the Delhi councillor Amantullah Khan, who had accused Vishwas of plotting a coup against Chief Minister Arvind Kejriwal.

Vishwas, 46, has also been made the in-charge of AAP in Rajasthan, Deputy Chief Minister Manish Sisodia said, adding Khan has been suspended.

Several MLAs had earlier said that they were in favour of a greater role for Vishwas in the AAP after the party's poor show in the Punjab Assembly and MCD polls.

Vishwas had threatened to quit if stern action was not taken against Okhla MLA Khan, who had also accused him of being a RSS-BJP agent.

Vishwas had accused Khan of being a mask and acting at the behest of a coterie surrounding Kejriwal. After the emotional outburst, Vishwas had threatened to quit the party.

Khan had on Monday resigned from the party's Political Affairs Committee (PAC).

Earlier, Vishwas had differed with Kejriwal on the issue of electronic voting machines (EVMs). He had refused to attribute the AAP's recent poll losses to alleged manipulation of EVMs and had instead stressed on the need to introspect.

However, it appeared to have yielded no results. Vishwas also remained adamant on Khan being sacked from the party. Khan had resigned from the party's Political Affairs Committee (PAC) on Monday.