India   All India  03 May 2017  DGMO protests to Pakistan on beheading
India, All India

DGMO protests to Pakistan on beheading 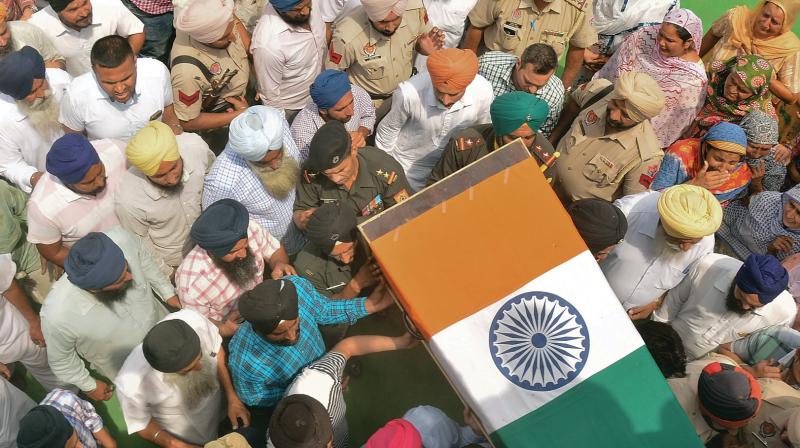 New Delhi: India’s director-general of military operations, Lt. Gen. A.K. Bhatia, spoke to his Pakistan counterpart, Maj. Gen. Sahir Shamshad Mirza, on the hotline on Tuesday and described Monday’s beheading of two Indian soldiers by a Pakistani border action team in the Krishna Ghati area of Poonch in J&K as a “dastardly and inhuman act”.

“The DGMO of the Indian Army conveyed that such a dastardly and inhuman act was beyond any norms of civility and merits unequivocal condemnation and response,” the Army said in a statement. Lodging a strong protest, the DGMO also conveyed to the Pakistani general that the Pakistan Army post in the vicinity of the incident site gave “full fire” support to the BAT action.

The Army said the DGMO also communicated India’s concerns over the presence of BAT training camps close to the Line of Control in Pakistan-occupied Kashmir. The Indian Army has already vowed an “appropriate” response to the “despicable act” while the Pakistan Army establishment has denied any involvement in the attack.

Jammu and Kashmir governor N.N. Vohra met Union home minister Rajnath Singh on Tuesday in the wake of increasing incidents of violence both in the Valley and along the international border. The two discussed various issues regarding the current law and order situation and agreed the next few months were “extremely critical”. Sources said the home minister asked the governor to ensure adequate security measures were in place so that there was no spurt in violence in the summer season.

During the DGMOs’ hotline interaction, the Pakistan Army asked India to produce “actionable evidence” on its claim that a Pakistani special forces team had sneaked across the LoC and beheaded the two Indian personnel.

“The Pakistan Army is a professional military outfit and upholds the highest standards of conduct. Allegations of mutilation are an Indian attempt to divert the attention of the world from situation within the Kashmir Valley,” Pakistan’s Maj. Gen. Sahir Shamshad Mirza claimed.

These Pakistani denials had little impact at Vainpoin village in Punjab, where 42-year-old Paramjeet Singh was laid to rest with full military honours. As the buglers sounded the Last Post, and his body, wrapped in the Indian tricolour, was brought for cremation, his relatives insisted they be shown the body. Finally, the ceremony went ahead after civil and military officials intervened. His wife Paramjit Kaur demanded that the Centre give a “free hand” to the Army so that Pakistan was taught a lesson.

Pakistani flags were burnt at some places in Punjab, including Ludhiana, where protesters demanded that Pakistan be paid back in the same coin.

In New Delhi, defence minister Arun Jaitley held a meeting with Prime Minister Narendra Modi when the beheading issue is learnt to have figured. But there was no official word on it.

In another incident in the Valley on Monday, militants killed five policemen and two bank employees as they robbed a cash van.

The intelligence agencies have claimed that nearly 55 terror camps were still active along the Line of Control in Pakistan-occupied Kashmir. Of these, 20 camps have come up in the past four months and were being used to push militants into India.

All 55 terror camps are said to be operating actively and after the surgical strikes by Indian Army Special Forces on launchpads across the LoC on the night of September 28-29, increased activity was seen at all these camps.

With 20 new camps coming up this year, there has been a sudden increase in infiltration attempts, with at least 60 such incidents being reported since January this year.

Intelligence sources said that efforts were being made by terror groups operating in PoK to increase the presence of militants in the Valley. As of now only 160 terrorists are reported to be active in the Valley.

“Pakistani agencies are working on a two-pronged strategy. While on one hand they are increasing attacks along the LoC and directing terrorists to target security forces, on the other they are using overground workers to instigate local youth to resort to stone-pelting in order to vitiate the atmosphere,” an intelligence official said.