An air of gloom descended as distraught families looked at the caskets brought back from Baghdad by minister of state for external V.K. Singh. 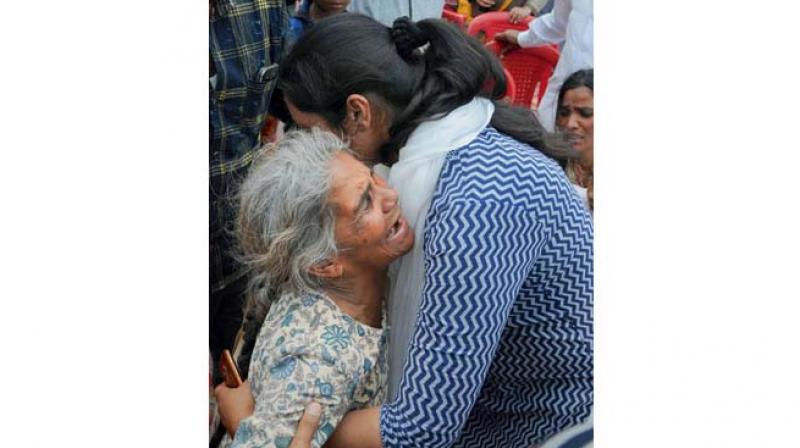 Family members in Amritsar mourn as they receive the body of their loved one abducted and killed by the ISIS in 2014. (Photo: PTI)

Chandigarh/Patna: The mortal remains of 38 Indians, out of the 39 killed by the Islamic State (ISIS) in Iraq, arrived on a special plane on Monday at the Amritsar International Airport amid emotional scenes.

Relatives of the deceased received the bodies with teary eyes around 2.30 pm and some victims, including Sonu from a village in Amritsar, were cremated soon after.

An air of gloom descended as distraught families looked at the caskets brought back from Baghdad by minister of state for external V.K. Singh.

While the remains of the 31 men belonging to Punjab and Himachal Pradesh were received in Amritsar, the rest were flown to Patna and Kolkata for handing them over to their relatives from Bihar and West Bengal.

to find where one has gone,” the minister told reporters.

He emphasised that both the state and central governments should work collectively to check illegal travel agents.

“We have told each state that law and order is their responsibility and they should catch illegal agents in their respective states and take action against them... We do not want anybody to go abroad illegally.

We want people to go legally so that we have their record,” he said.

Punjab minister Navjot Singh Sidhu, who was also present at the airport, said that the state government will give `5 lakh each to the family members of the victims and a member of each family will be given job as per qualification.

The Punjab government has been giving `20,000 per month to the family members of the victims who were killed in Iraq.

Malkit Ram, brother of Saganandlal from Jalandhar who was among the 39 Indians killed in Iraq, told reporters, “The government has promised us compensation and employment. They have said that it’s after DNA tests that they are giving the body so that there is no doubt or confusion.”

Family members of some victims said doctors and the district administration had advised them not to open the coffins and conduct the last rites immediately.

Chief minister Amarinder Singh had earlier called on the “Bharat Bandh” protesters to ensure that the mortal remains of the Iraq victims were allowed to be transported to their native villages without any impediment.

Amritsar deputy commissioner Kamaldeep Singh Sangha said arrangements had been made to transport the mortal remains of the victims to their native places in Punjab and Himachal.

In West Bengal technical education, training and skill development minister Purnendu Basu arrived at the airport in the evening to receive the mortal remains of Khokon Sikdar and Samar Tikadar.

In Bihar, chief minister Nitish Kumar and other ministers who were present at the Patna airport to receive the mortal remains of  five deceased — Santosh Singh, Vidyabhushan Tiwary, Adalat Singh, Dharmendra Prasad and Sunil Kushwaha.

“Mortal remains will be taken to Siwan and handed over to the relatives,” said an official.

Santosh Singh’s mother told reporters in Siwan, “Nobody from the government came to inquire about how we lived in the absence of my son… We want adequate compensation.”

Foreign minister Sushma Swaraj had informed Parliament on March 20 that as many as 40 Indians were abducted by terror group ISIS from Mosul in Iraq in June 2014, but one of them escaped posing as a Muslim from Bangladesh.

The remaining 39 Indians were taken to Badoosh and killed, she had said. So far, 38 bodies’ identity has been established. In order to conclusively verify the identity of the body suspected to be that of the 39th victim — Raju Kumar Yadav from Bihar — the government had recently sent a second DNA sample of Yadav’s brother to Baghdad.

After the liberation of Mosul from ISIS last year, a massive search was launched for the missing Indians. It was finally confirmed they were killed by the ISIS and buried under a hillock at Badosh near Mosul.

The 39 bodies were earlier exhumed after deployment of deep-penetration radars at the hillock. The DNA samples of 38 bodies fully matched with that of the blood relatives of the missing Indians. Presence of long hair and a kada (iron bangle) — symbols of the Sikh faith — were the initial indications that these were indeed the bodies of the missing Indians.