It pointed out that the court has made it clear that no further extension could be granted for any reason. 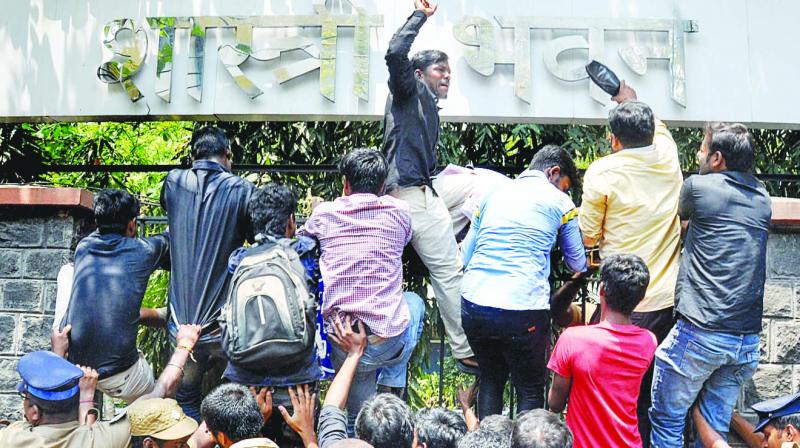 Activists stage a demonstration against the Central and state governments at Shastri Bhavan in Chennai on Monday for their alleged failure to constitute the Cauvery Water Management Board as per the Supreme Court order. (Photo: PTI)

New Delhi: The Supreme Court on Monday agreed to hear on April 9 the application filed by Tamil Nadu seeking initiation of contempt against the Centre for not implementing the February 16 judgment on Cauvery dispute by setting up the Cauvery Management Board (CMB).

TN counsel G. Umpathy made a “mention” before a bench of Chief Justice Dipak Misra and Justices A.M. Kanwilkar and D.Y. Chandrachud for urgent listing of the application. He submitted that the Centre by not framing the scheme had committed contempt.

When the CJI asked the counsel whether the “scheme” meant CMB, Mr Umapathy said as per the scheme, CMB and Cauvery Water Regulation Committee had to be set up within the time limit of six weeks, but the Centre had not done.

“The scheme does not mean board only. We had given judgment on all aspects to resolve the issue. We understand the TN problems, we will solve the issue and see that TN gets water,” the CJI observed.

When Mr Umapathy pressed for listing the matter this week itself, the CJI said, “We will hear on April 9.”

Though the counsel for the Centre did not “mention” about the application for clarification, it is likely that both the petitions will be heard together on April 9.

The application by the Tamil Nadu government wanted contempt of court proceedings against Union Cabinet secretary P.K. Sinha and water resources secretary U.P. Singh as they failed to give effect to the judgment within the stipulated period of six weeks.

It pointed out that the court has made it clear that no further extension could be granted for any reason.

TN stated that the state sent letters dated 13.03.2018, 21.03.2018 and 23.03.2018 to the Centre, inter-alia, requesting for the constitution of Cauvery Management Board and Cauvery Water Regulation Committee within the time limit stipulated by this court so that water is made available to the farmers of the state for the ensuing irrigation season of 2018 commencing from June 1.

TN said ensuring timely release of water is apparent in the judgment itself and therefore, any delay in constituting Cauvery Management Board and Cauvery Water Regulation Committee is to the prejudice to the farmers of state of Tamil Nadu. The state wanted the apex court direction to implement the tribunal’s decision is smoothly made functional and the rights of the States as determined by tribunal are protected.

Centre wants clarification
Centre in its application has asserted that notifying the constitution of Cauvery Management Board during the time when Assembly elections in Karnataka has been announced by the Election Commission would lead to massive public outrage, create serious law and order problem and may vitiate the election process.

It said Cauvery is a very emotive issue in Karnataka and in the past the issue has led to serious law and order situations leading to avoidable loss of human lives and property. If the Central government were to constitute a `scheme’ under Section 6 A of the Inter State Water Disputes Act and notify it during the currency of the assembly election it would lead to massive public outrage, cause serious law and order problems and vitiate election process.

While Tamil Nadu maintained that the object of the scheme was to implement the Final award of the Cauvery Tribunal, the Centre was mandated to put in place the CMB that will have control of the reservoirs in Karnataka and Cauvery Water Regulation Committee to give effect to the February 16 judgment. Puducherry has also responded on similar lines in favour of the CMB.

Karnataka, on the other hand opposed the CMB saying the management and regulation of water of a State, viz equitable share of a state determined by adjudication is the sole prerogative of the State. Therefore a Scheme in the form of CMB is clearly ultra vires the federal structure on the powers of the States envisaged under the Constitution. Further the apex court has not endorsed the CMB and therefore the scheme should only be a body for dispute resolution. Kerala while endorsing CMB wanted slight changes in the composition of Members.