In a bid to check spread of fake news, the govt came out with new rules for issuing and withdrawing Press Information Bureau tag to journos. 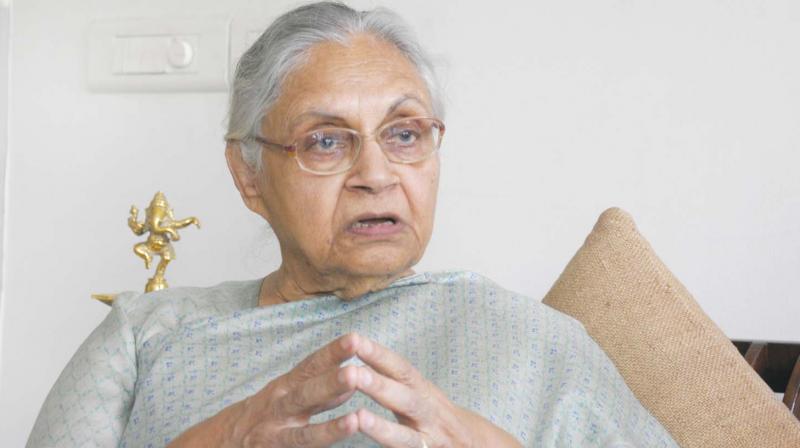 Sheila Dixit further said, 'Today, we only get to see the news that is pro-govt. India has always believed in a free media and that should continue.' (Photo: File)

"What is the definition of fake news? In a democratic system, any kind of restrictions on the media is equal to killing democracy" she said.

She added "Today, we only get to see the news that is pro-govt. India has always believed in a free media and that should continue."

In an effort to check the spread of fake news in electronic and print media, the government on Monday came out with new guidelines for issuing and withdrawing Press Information Bureau accreditation to journalists.

Under the new guidelines, any complaints regarding fake news will be referred to the Press Council of India (PCI) for print media and to the News Broadcasters Association (NBA) in case of electronic media.

The two bodies will determine whether the news is fake or not.

The determination is expected to be completed within 15 days. Once the complaint is registered for determination of fake news, the correspondent or journalist whoever created or propagated the fake news will, if accredited, have the accreditation suspended till such time the determination regarding the fake news is made by the regulating agencies mentioned above.

The Accreditation Committee of the PIB, which consists of representatives of both PCI and NBA, will be reached out for validating the accreditation request of any news media agency.

"While any confirmation of publication or telecast of fake news having been confirmed by any of these agencies, the accreditation shall be suspended for a period of six months in the first violation and for one year in the case of second violation and in the event of third violation it would be cancelled permanently," the release added.

The press release further justified the amendment by claiming, "While examining the requests seeking accreditation, the regulatory agencies will examine whether the `Norms of Journalistic Conduct' and `Code of Ethics and Broadcasting Standards' prescribed by the PCI and NBA respectively are adhered to by the journalists as part of their functioning. It would be obligatory for journalists to abide by these guidelines".