The Congress-led Punjab government had on Sunday ordered a security clampdown as a precautionary measure. 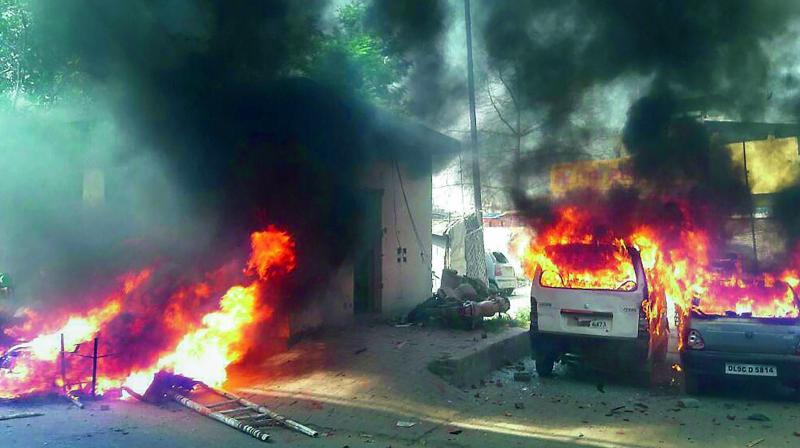 Vehicles set on fire by a group of protesters in Meerut. (Photo: PTI)

Chandigarh: Dalits took out a protest march at many places in Punjab on Monday to protest against the alleged dilution of the SC/ST Act, even as the state government ordered closure of educational institutes, suspended bus services, and curtailed mobile and Internet connectivity. No major incident of violence was reported from any part of the state even as there were incidents of few altercations in places like Bhatinda and Ferozpur.

The Congress-led Punjab government had on Sunday ordered a security clampdown as a precautionary measure.

Chief Minister Amarinder Singh had ordered that schools, colleges and other educational institutes would remain shut on Monday, while the Internet services were suspended from 5 pm on Sunday till 11 pm on Monday.

Meanwhile, the CBSE postponed Class 12 and Class 10 examinations scheduled to be held on Monday in Punjab at the request of the state government in view of the Bharat Bandh.

“Taking cognisance of the letter of the director general (school education), the CBSE decided to postpone all Class 12 and 10 examinations scheduled for April 2 in Punjab,” it said in a statement issued on Sunday night.

“Exams will carry on as per schedule in UT of Chandigarh and rest of the country,” it said.

In a later development, the education department said the final practical examinations of Classes 10 and 12 of the Punjab School Education Board will be conducted on April 11 instead of April 2.

The chief minister appealed to the protesters not to take law into their own hands, obstruct transport movement or harass commuters.