MP: 5 die in dalit protests, curfew on, Army called in

A student leader was killed when he was hit by bullets allegedly fired by demonstrators in Morena town. 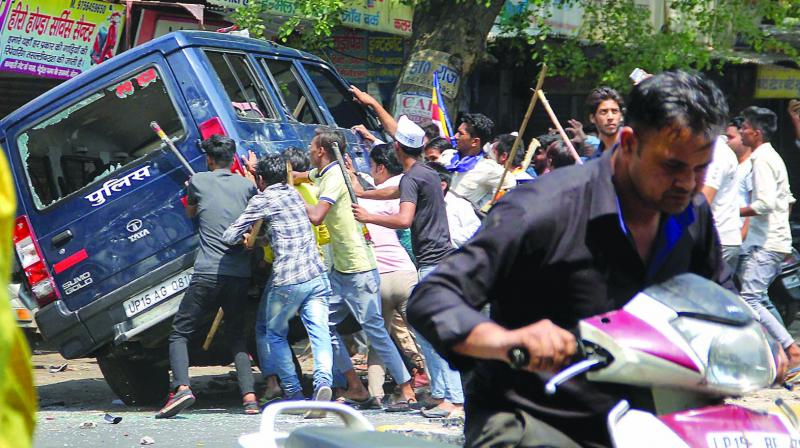 Dalit protesters blocked trains, clashed with police and set dozens of vehicles ablaze in several states during a nationwide bandh on Monday.

Bhopal: At least five people were killed and several others, including some police personnel, injured as the protests by various dalit outfits against the recent verdict by the Supreme Court diluting SC, ST (Prevention of atrocities) Act, 1989, as a part of “Bharat Bandh”, turned violent in MP on Monday.

Violence particularly engulfed the backward Gwalior-Chambal region of MP during the bandh, leading to imposition of curfew in districts of Gwalior, Morena and Bhind.

“Five people were killed and several others injured following incidents of violence witnessed in different places in the state during the bandh. Exchange of fire between clashing groups led to death of five people,” inspector general of police (law and order) Makrand Deoskar told reporters here.

The police opened fire in air and lathicharged at several places to bring the situation under control, he added. While two deaths each were reported in Gwalior and Bhind districts, a youth was killed in Morena district.

A student leader, identified as Rahul Pathak, was killed when he was hit by bullets allegedly fired by demonstrators while he was standing in the balcony of his house in district headquarters town of Morena, a senior district police officer said.

Three protesters were injured in reported police firing in the area, reports reaching here said. Several shops and vehicles were torched in Morena. Demonstrators also pelted stones at a train in Morena railway station. Violence marked the bandh in Gwalior region in which two people were killed allegedly in exchanges of fire between rival groups.

Curfew was clamped and the Army was deployed in Gwalior region as situation threatened to go out of control, a senior district officer told this newspaper.

Similarly, mobs set on fire several vehicles and indulged in stone pelting and exchange of fire in Bhind district during the bandh, leading to death of a youth.