India   All India  03 Mar 2022  Have not received any reports of Indian students being held hostage in Ukraine: MEA
India, All India

Have not received any reports of Indian students being held hostage in Ukraine: MEA 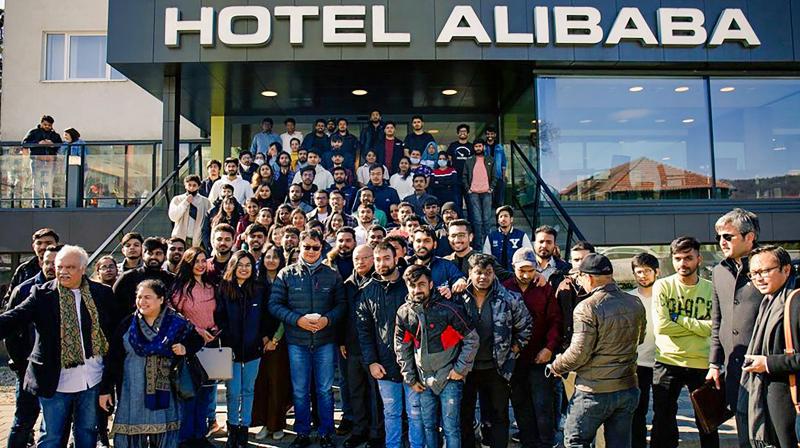 Union Minister Kiren Rijiju with Indian students, during his visit to Slovakia to facilitate the evacuation of Indians stranded in war-torn Ukraine, in Košice, Slovakia. (Photo: PTI)

New Delhi: The government on Thursday said that the Indian embassy in Ukraine is in continuous touch with its stranded citizens, adding that it has not received any reports of students being held hostage in the war-hit country.

The government's remarks came in response to media queries after the claims of the Russian embassy in India on Wednesday that the Indian students have been taken hostage by Ukrainian security forces to use them as a human shield.

Refuting the reports of Indian students being held hostage, the Ministry of External Affairs (MEA) spokesperson Arindam Bagchi informed that many students left Kharkiv yesterday with the cooperation of Ukrainian authorities.

"We have not received any reports of any hostage situation regarding any student. We have requested for the support of the Ukrainian authorities in arranging special trains for evacuating students from Kharkiv and neighbouring areas to the western part of the country," he added.

Bagchi further said that the MEA has been coordinating effectively with the countries in the region, including Russia, Romania, Poland, Hungary, Slovakia and Moldova, and expressed gratitude towards Ukrainian authorities for their help in the evacuation of Indians.

"A large number of Indian nationals have been evacuated from Ukraine in the last few days. We appreciate the help extended by the Ukrainian authorities to make this possible. We thank Ukraine's western neighbours for receiving Indian nationals and accomodating them while they waited for flights to take them back home," he stated.

Notably, the Russian embassy in India on Wednesday wrote in a tweet, "According to the latest information, these students are actually taken hostage by the Ukrainian security forces, who use them as a human shield and in every possible way prevent them from leaving for Russia. Responsibility, in this case, lies entirely with the Kyiv authorities."

However, Ukrainian Foreign Minister Dmytro Kuleba, in a tweet, said that the country has established an emergency hotline for African, Asian and other students wishing to leave Ukraine as the tensions between Moscow and Kyiv rages on.

Meanwhile, a total of 17,000 Indian nationals have left Ukraine since the advisories were issued and flights under 'Operation Ganga' have been increased to facilitate the evacuation of remaining students stranded in Ukraine.

The students who left Ukraine also included some Indians who had not registered with the Embassy of India in Kyiv previously.