The police forces are continuing with the combing operation to nab those Maoists who escaped. 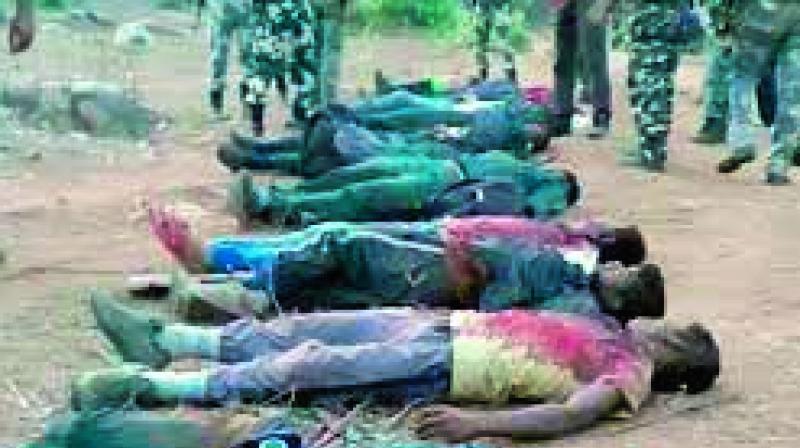 Bodies of slain Maoists who were killed in an encounter near Chhattisgarh’s Bijapur district bordering Telangana. (Photo: Asian Age)

Bhadrachalam: Ten CPI Maoists and a constable of the Greyhound commando force were killed in an encounter in the forested areas of Chhattisgarh's Bijapur district bordering Telangana in the early hours of Friday.

Six women were among the rebels killed in the clash that took place in Tadapalagutta-Pujari- Kanker forest area, about 40 km from Venkatapuram police station in Jayasankar-Bhupalapalli district of Telangana.

The Greyhound constable who died in the fight Susheel Kumar, is a native of Vikarabad. The bodies of two of the Maoists, one a woman, were shifted to Bhadrachalam and placed in freezers in the area hospital.

None of the slain Maoists have been identified. But it is speculated that Haribhushan, CPI- Maoist Telangana secretary, and his wife Sammakka were among those killed. It is also suspected that  Haribhushan's sister Bharathi and his brother Ashok were in Bhadrachalam.

Amber Kishor Jha, superintendent of police of Bhadradri-Kothagudem district said, "We have not identified any of the slain Maoists. The remaining eight dead bodies will be shifted on Saturday morning."

Autopsies of the deceased will be conducted in Bhadrachalam in all cases as per a High Court order, in the presence of two senior medical officers and a forensic expert. The autopsy process will be recorded on video.

According to the police, a joint operation of the Telangana and Chhattisgarh police was underway early on Friday morning and ran into a group of Maoists who opened fire indiscriminately, resulting in the death of the

Greyhound constable Sushil Kumar.  The police returned fire, which killed 10 Maoists. The police forces are continuing with the combing operation to nab those Maoists who escaped. Police believe four other Maoists were injured in the incident.