UP polls: BJP for Election Commission check on burqa-clad voters

UP has witnessed high voter turnout this time and women voters, especially from the minority community. 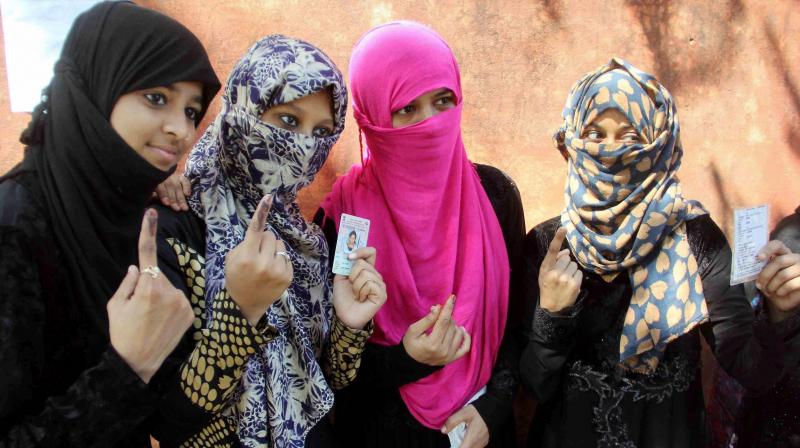 Muslim girls show their fingers marked with indelible ink after casting vote at a polling station during the fourth phase Assembly elections in Allahabad. (Photo: PTI)

New Delhi: The BJP has asked the Election Commission to deploy women police personnel at polling booths in Uttar Pradesh’s sixth and seventh phases to specifically check the voter ID cards of “burqa-clad women in order to curb bogus voting”. The party also demanded that para-military forces be deployed at “sensitive” and “ultra-sensitive” polling booths.

The Opposition, dismissing the prospect of bogus voting as a bogey, said that a “desperate BJP” is trying to polarise voters in the hope that Hindu votes will consolidate in its favour.

In a letter sent to the Chief Election Commissioner (CEC) on Wednesday night, the BJP said, “The BJP demands that to establish the identity of burqa-clad female voters in the sixth and seventh phase of the UP polls, women police and central para-military forces be posted at the sensitive and hyper-sensitive polling booths… Adequate deployment of female police would ensure proper checking of women voters, and at the same time, minimise incidents of bogus voting.”

Campaigning for the sixth phase ended Thursday, and voting is scheduled for March 4. The seventh and last phase of voting is on March 8.

Uttar Pradesh has witnessed high voter turnout this time and women voters, especially from the minority community, have come out in large numbers to cast their vote.

Though the BJP leadership has been highlighting development and good governance as their main poll planks, given the sizable number of Muslims in almost every district of the state, the party is also banking on “measured polarisation.” Two of its Hindutva hawks — Suresh Rana and Sangeet Som — were deputed in Mau and Kushinahar respectively. The two areas, with a significant Muslim votebank, will go to polls in the sixth phase.

The two leaders are addressing small gatherings to avoid being monitored by the EC, which keeps a watch on politicians speeches during campaigning.

Mr Rana, an accused in the 2013 Muzaffarnagar riots, is also the party candidate from Thana Bhawan seat in Shamli. He was also booked in January by the state police on charges of inciting hatred after he said that curfew will be imposed in Kairana, Deoband and Moradabad if he is elected. Mr Som, contesting from Sardhana, was also booked for showing a controversial video clip and violating the EC’s guidelines.