The submarines are designed by French company DCNS and are being built by Mazagon Dock Ltd in Mumbai. 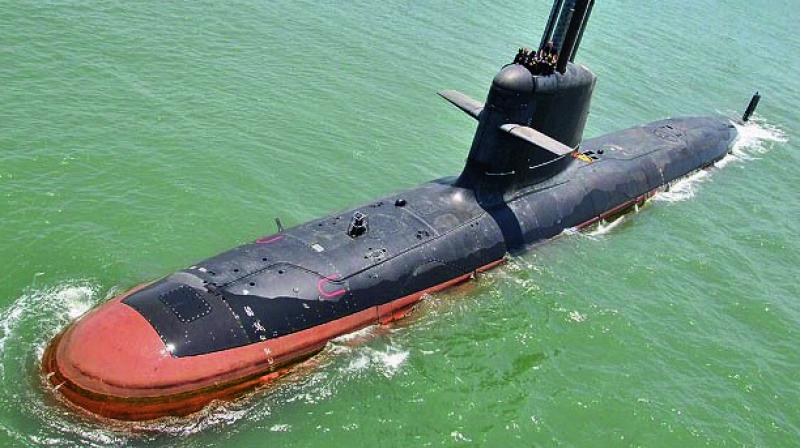 A file photo of a Scorpene class Kalvari submarine during trials. An anti-ship missile was test-fired for the first time from an indigenously built submarine of the same make.

The missile made a direct hit on the target somewhere in the Arabian Sea. Besides INS Kalvari, all the five Scorpene class diesel-electric attack submarines being built under Project 75 will be equipped with the anti-ship missile, which has a proven record in combat.

The submarines are designed by French company DCNS and are being built by Mazagon Dock Ltd in Mumbai.

In another development, three newly-developed weapon locating radars of the Defence Research and Development Organisation, and deployed for the past couple of months on the Line of Control on a trial basis, have proved their worth in gold — having stopped the use of heavy artillery from the Pakistani side.

“Just after the surgical strike on the intervening night of September 28-29, when Pakistani snipers hit our soldiers, we also hit back with sniper firing,” a top defence ministry source told this newspaper.

“That is when they resorted to heavy use of artillery guns, which created mayhem in our civilian areas, often leading to casualties. So we decided to deploy these three WLRs on the LoC on a trial basis. And it has been a very successful move with Pakistani artillery firing having been stopped,” the source said.

On Thursday, state-owned DRDO handed over the WLR to the Indian Army that will be produced under technology transfer pacts by Bharat Electronics Ltd.

While four are already in existence, the Army has asked for 30 more such radars.

“After meeting the Army’s requirement, we may even export it to other countries,” defence minister Manohar Parrikar said.

The radar gives the exact location of the enemy’s firing position and feeds the coordinates to the friendly artillery systems, which fire at the exact spot, giving less reaction time to the adversary. All this takes about two-three minutes.