The most significant event in 2016 was the surrender of 117 militants and insurgent outfits. 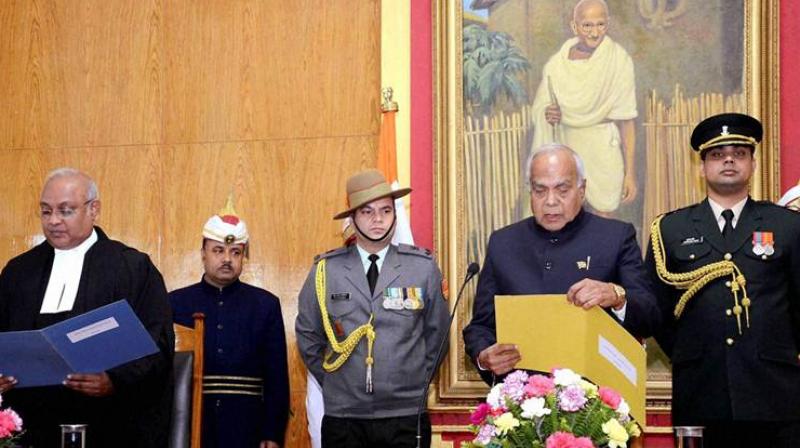 Shillong: Meghalaya Governor Banwarilal Purohit on Friday lauded the state government for facilitating surrender of armed militants and allowing them to join national mainstream by rehabilitating them.

"My government has created an enabling environment to create a conducive environment to facilitate surrender of the cadres of militant and insurgent outfits and assimilate them into the national mainstream which is yielding positive results," Purohit said addressing the opening day of the 15-day budget session of the State Assembly.

The most significant event in 2016 was the surrender of 117 militants and insurgent outfits and also the disbanding of one insurgent outfit in June last year in West Garo Hills district, he said.

The Governor also highlighted the measures taken to strengthen the internal security apparatus, including induction of the anti-militancy Special Force-10, to create a safe and secure environment for overall growth in the state resulting in improved 'internal security situation'.

"Police personnel have been augmented and posted in the interior areas of the state to instill confidence among the local people and to check the movements and activities of these militant groups," he said adding that a strategy of sustained operations has been adopted which resulted in neutralizing many militant cadres and seizing of huge cache of weapons and ammunition.

On the Indo-Bangla border fencing, the Governor said that the government is committed to complete the border fencing at a fast pace especially in certain pockets where the fencing work is still pending.

The Governor also stated that the situation on the international border with Bangladesh as well as the inter-state border with Assam, especially in Block-I and

Block-II areas, also remained peaceful and that comprehensive measures are being put in place to prevent influx.

Purohit also informed that the 40 MW New Umtru Hydro Electric Project is all set to be commissioned within 2017-2018 besides 1,067 KW of solar power plants.

"The first unit is expected to go for trial run in the last week of March, this year," he said, adding that other power projects under implementation are the 22.5 MW Ganol HEP with three units in West Garo Hills and 1.5 MW Lakroh Small HEP in East Jaintia Hills.

The Governor said the government is also in the process of tying up funding for the renovation, modernization and up-gradation of the 1979-commissioned 60 MW Umiam stage-III Power Project to extend its life by another 35 years.