The protesters threatened to block essential services to the capital if their demands for reservation are not met. 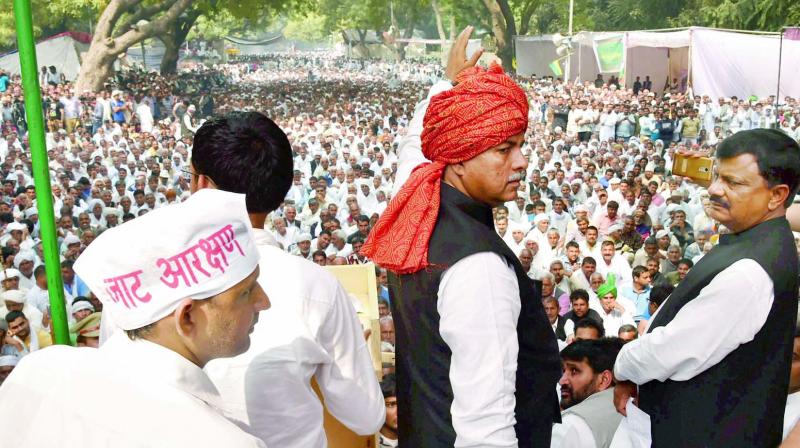 New Delhi: The Jat quota stir on Thursday attained ominous proportions as thousands of community members protested at the Jantar Mantar in the national capital, threatening to block essential services if their demands for reservation are not met.

On Thursday evening, several thousands of Jat community members assembled and protested at the Jantar Mantar, pressing for reservation in jobs and educational institutions.

The protesters threatened to block essential services to the capital if their demands for reservation are not met. “Life in Delhi will come to a standstill if reservation demands not met,” the leaders warned.

Agitators from UP, Haryana, Uttarakhand, Delhi and Punjab assembled with their demands, which also includes jobs to the next of kin of those killed in the 2016 violent agitation, withdrawal of cases against the Jats and action against officers who were involved.

Violence during the February 2016 agitation by Jats in Haryana left 30 people dead and over 200 injured. Government and private properties worth hundreds of crore were also damaged.

“We have come here to protest against the insensitivity which the Manohar Lal Khattar government in Haryana has shown to our demands. We will march to Parliament with our demands,” said Yashpal Malik, president of the All-India Jat Aarakshan Sangharsh Samiti.

He said the community was prepared for a long-drawn battle and that essential supplies are likely to be affected.

“It is for the government to come out with a solution, but the kind of attitude the Haryana government has shown, we don’t feel it wants a solution. We are ready for a long-drawn battle and this march is an announcement of that,” said Mr Malik, adding that over 50 lakh Jats from 13 states will be joining the stir.