Despite the gaps, Mothers’ Alliance groups have been soldiering on. 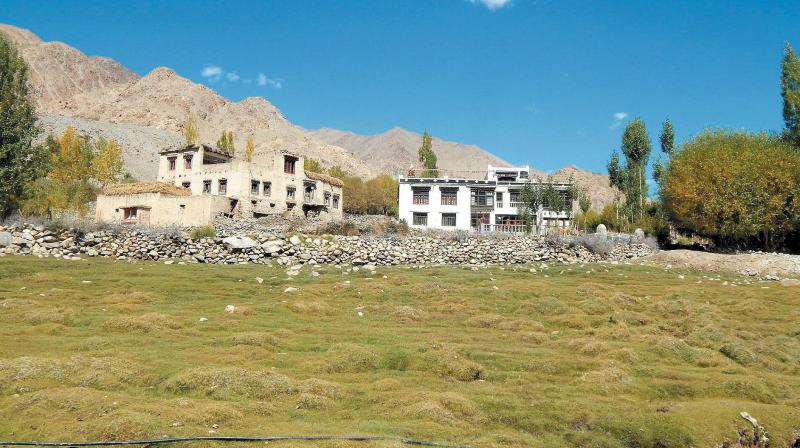 Ladakh, a pristine, serene land nestling in the Himalayas, a zero-waste region, is witnessing its most famous town, Leh, groaning under garbage. Tourists drawn to its windswept breathtaking landscape do not just stop at that. They also leave behind mounds of garbage, in the form of packaged foods. Interestingly it was the 2009 Bollywood blockbuster 3 Idiots that opened the floodgates of a tourist influx to Ladakh. Eager to experience the scenic beauty so evocatively captured in the movie — tourist footfall increased exponentially. Harmony in nature and sustainable practices that have characterised the region, have come under fire. The “use-and-throw” culture is threatening the fine balance in this ecologically-fragile zone.

Sadly, the waste management system in Leh is patchy and barely able to cope with the mounting garbage. The present garbage-dumping site at Bomb guard in Diskit Tsal, close to the town is ill-planned and proving to be detrimental to the environment.

Some 17 km from Leh, however, this reality changes. An “elongated” village stretching over 12 km, Phyang has everything that Ladakh is famous for — glaciers meadows, pastures, gurgling mountainous springs and a stream that flows through. The most striking feature however is — the village is spotlessly clean, “litter-free”.

Arguably Phyang does not cater to the tourist hordes like Leh but still the contrast is astounding. Tsering Phuntsog, 50, who works as a contractor at Phyang says with pride, “Although packaged foods have increased dramatically over the last eight-10 years, our village looks even cleaner than before!” He or any other local will tell you why. It is because of the “Ama Tsogspa”, they will say. In Ladakhi language, this term means “Mothers’ Alliance”.

“Ama Tsogspa” is literally a body of village mothers who first came together in the early ’90s in Leh. In the two districts — Leh and Kargil — these groups have since multiplied. Today Mothers’ Alliance exists in over 22 villages in Leh district and in several villages in Kargil district, including the remote Zanskar valley. Some 5,000 women are members of different groups across Ladakh.

Sustainable farming, women empowerment and responsible tourism are central to its philosophy. But quintessentially, it remains a homegrown collective of concerned mothers. “Ama Tsogspa” simply believes that any issue related to the community is their concern and responds to it organically. In 1998, the use of polythene bags was banned in Ladakh. This happened largely due to the sustained efforts of the mothers groups.

The more recent cleanliness drive is the reason why villages like Phyang are becoming litter-free. Tsering Dolma, 47, a housewife is an active member of Mothers’ Alliance, Phyang. “Twice a year we collect garbage and then we burn it,” she says. However, there are gaps in their awareness. Without an understanding of segregation, recycling the waste or the need for an eco-friendly waste disposal system — they collect garbage without segregation. Then they burn it indiscriminately. But there is a growing realisation on how dangerous this can prove. “I didn’t know that burning of plastics releases harmful gases,” says Dolma a little sheepishly; this is indeed unfortunate. It means that while women groups have been actively sprucing up their village, carcinogenic and neuro-toxic fumes were being infused into the air.

Despite the gaps, Mothers’ Alliance groups have been soldiering on. They promote skills such as weaving, knitting, spinning and dyeing and the practice of traditional medicine. Its members are engaged in livelihood activities related to agriculture, dairy and food processing. Adult education has been taken up with members teaching community members in local language, Bodhi.

Increasingly, Mothers’ Alliance groups are taking a stand against social evils like dowry and alcoholism. Yet discerning members are conscious of their own limitations. They realise that in order to be more effective in addressing community matters, their capacities need to be developed further.

Tashi Dolker, 43, an active member of Mothers’ Alliance, who teaches at a government school at Changthang, a high altitude plateau says: “We can play a bigger role at the local level. We need to increase our awareness and build our skills. The government or local civil bodies should organise training on issues of garbage management, government schemes; give us information specially on provisions related to women. They should organise exposure trips for us to understand issues in other Himalayan regions. This will help us a lot.”

Sonam Ladol, 45, president, Mothers’ Alliance, Phyang says, “Members have a lot of energy and interest but we need facilities to draw the best out of them. For this we need support.” With a sigh, she adds: “Actually our real potential is yet to be realised.”

Perhaps this lament by Ladol could be a cue for the shape of things to come. “Ama Tsogspa” reflects the redoubtable energy and commitment of the mothers of Ladakh of course. But equally, its vast network celebrates the wide acceptance of women as social activists, community leaders and change-makers in the region. “Ama Tsogspa” is primed to take on increasingly significant roles in society. And that truly is a precious heritage.