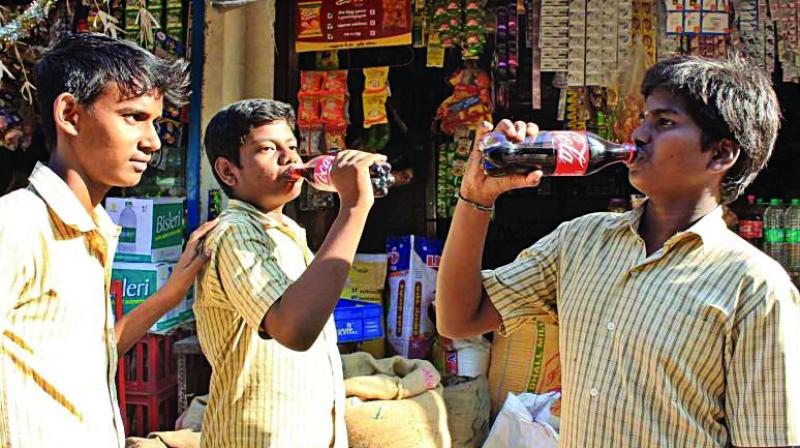 A file photo of children drinking Coca-Cola in Chennai.

The order also removed an interim stay passed by the court in November 2016, banning the co-packers of Pepsi and Coca-Cola from using the river’s water for their bottling plant.

A division Bench comprising Justice A. Selvam and P. Kalaiyarasan in the order charged one of the petitioners, D.A. Prabakar, secretary of Tirunelveli district consumer protection association, for approaching the court with vested interests.

The court, however, noted people’s anguish against the government for not taking steps to improve the irrigation system in the past 70 years to avoid surplus outflow of Thamirabarani river water into the sea.

The managing director of South India Bottling Co. Pvt. Ltd, co-packers for Coca-Cola Co., told the court that Mr Prabakar, who was dealing with the company’s cases for nearly three years, was removed from service for unethical practices. He had since then been filing petitions against them before various forums and also in the National Green Tribunal, south zone, to settle personal grievances.

Prathishta Business Solution Pvt. Ltd, co-packer of Pepsi Cola Co., and South India Bottling Co., were operating on 30 acres each in Gangaikondan SIPCOT industrial area after signing a contract for 99 years with the state government. The government agreed to supply nine lakh litres and 15 lakh litres of water daily to these two companies, respectively, at a rate of Rs 37.50 per 1,000 litres.

Mr Prabakar and DMK MLA Appavu filed the two PILs in court, demanding a ban on the supply of Thamirabarani water as the river was the only source for drinking and agriculture purposes in five southern districts. The petitioners said the firms paid a paltry sum for using water while their products were priced high.