No one injured in the incident, the third in five days 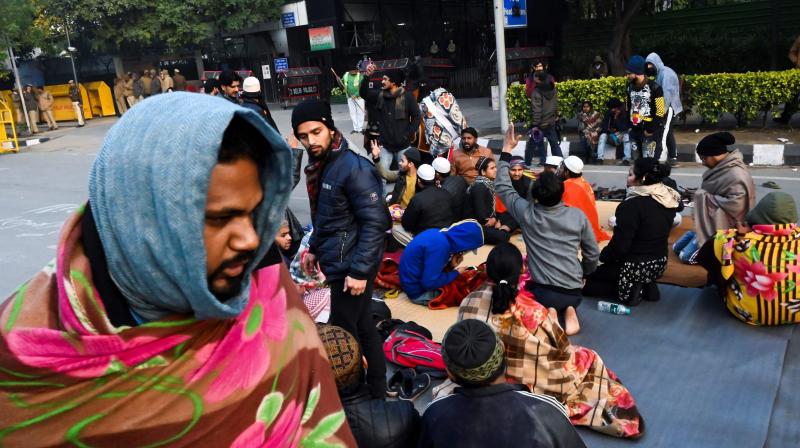 People block a road near the police headquarters to protest

NEW DELHI: In the third such incident inside of a week, two unidentified persons opened fire outside Gate No. 5 of Jamia Millia Islamia on Sunday night, the Jamia Coordination Committee (JCC) said.

A statement issued by the committee, a group comprising students and alumni of the university formed to protest against the Citizenship Amendment Act, said the attackers were on a red Rcooty.

Police said they were verifying the JCC's claims.

Asim Mohammed Khan, former Congress MLA from Okhla, said the incident occurred around 11.30 pm. "We heard the gunshot. That is when we stepped out to see and the two men left on a Scooty," a student said.
"We have taken down the vehicle number and called police," he added.
This is the third firing incident in the Jamia Nagar area in a week.
On Thursday, a minor fired at anti-CAA protesters marching towards Rajghat, injuring a student.
Two days later, a 25-year-old fired two rounds in air in Shaheen Bagh in Jamia Nagar. No one was hurt in the incident.
The incident on Sunday night triggered panic in the area. A police vehicle had reached the spot after the incident but was chased away by angry students.
Hundreds of students and locals gathered outside the university.
Many raised slogans against the Delhi Police. They also staged a dharna outside the Jamia Nagar police station.
Shezad Ahmed, a JMI student and resident of Zakir Nagar, said they were not even allowed to protest peacefully.
"We are not going to be deterred by such incidents. We will continue with our protest," he added.