These women had accompanied their husbands to the Valley under the government’s rehabilitation policy. 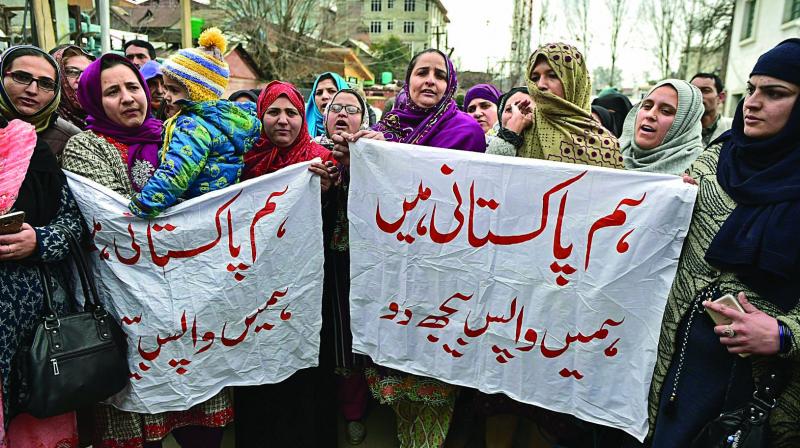 A group of women from Pakistan hold a protest demanding they be sent back to Pakistan. (Photo: PTI)

Srinagar: A group of Pakistani spouses of former militants on Saturday held a protest here, demanding that they be sent back to their native country as they feel being “caged” in Jammu and Kashmir.

These women had accompanied their husbands to the Valley under the government’s rehabilitation policy. Under this policy announced by the then Omar Abdullah-led national Conference-Congress coalition government following the consent of the Union home minister in 2010, around 212 former militants returned to Jammu and Kashmir front Pakistan-occupied-Kashmir (PoK) through Nepal and other routes between 2010 and 2012.

Though the government had received as many as 1,082 applications from such youth who had crossed the Line of Control (LoC) apparently to receive arms training, the government had approved only 219 cases after security clearance. Many of them returned here with their Pakistani or PoK wives and children.

A group of these women on Saturday relocated to Srinagar’s media hub Mushtaq Press Enclave to make a passionate appeal to Prime Minister, Narendra Modi, who will be on a daylong visit of the state on Sunday and his Pakistani counterpart Imran Khan that they be issued travel documents to return home. A banner they were carrying read in Urdu “We’re Pakistani. Send us home”.

The protesting women told reporters that many of the Pakistani spouses of the former militants are living in “miserable conditions” in the Valley and have virtually been “imprisoned”.

They said that they have not been provided the permanent resident certificates as promised and some of them are being treated like criminals by the law enforcing agencies for no fault of theirs. “We’re not infiltrators or intruders. We were invited here to live a peaceful and decent lives with our spouses but were are being treated like criminals here,” said Kubra Gillani, the 27-year-old resident of PoK’s Domel area who was divorced by her husband Muhammad Altaf Rather “after I could not bear a child”.

Another woman Aasia Hassan said that there are several others like Gillani who have no one to look after them after they got divorced or became widows during the course of time. She said that a couple of Pakistani spouses of the former militants committed suicide after they were denied permission to return home.

In Muzaffarabad, the families of some of these women said that they have become the latest victims of the “forced division” of the state and the tense relations between India and Pakistan. They said that these women are in trouble and cannot travel between the two sides for they have been denied required documents by the Indian authorities. Parveen Akhtar, whose daughter is living in the Kashmir Valley, said, “My daughter made many attempts to come to meet me but she was not allowed to travel”.