Police failed to nab the accused including a Samajwadi Party leader who owned the structure. 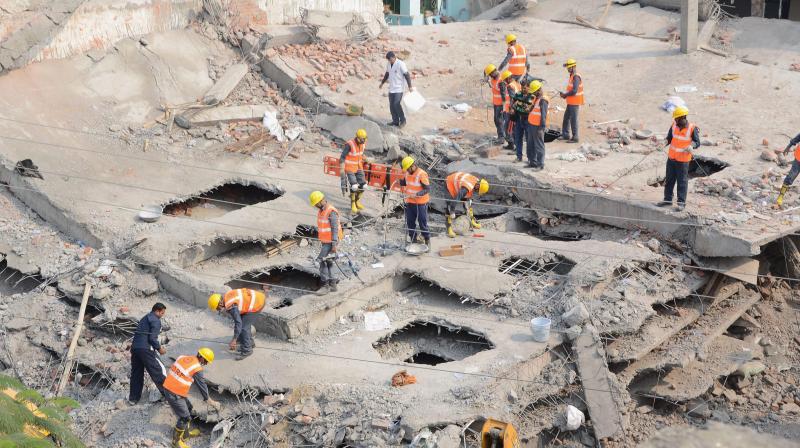 Rescue and relief works in progress at the site of the collapsed under-construction building in Chakeri, Kanpur. (Photo: PTI)

Kanpur: The toll in the under-construction building collapse here climbed to eight today with the recovery of another body from the debris during the rescue operations which continued for the third day even as police failed to nab the accused including an SP leader who owned the structure.

The relatives of some of the labourers staged protest outside the residence of the building's owner Mehtab Alam here but were soon dispersed by police since the house was vacant.

Kanpur zone Commissioner Mohammad Iftikharuddin has formed a team comprising two ADM-level officers to ascertain the quality of material used in the construction of the building in Jajmau area. "The team has been instructed to consult IIT and experts," he said.

Chief Medical Officer, Kanpur, Ramayan Prasad said that three out of the 18 labourers who were injured in the collapse have been discharged while two of the remaining 15 are still in critical condition.

Meanwhile, KDA Secretary Jaishree Bhoj said that a two-member team formed by her yesterday to probe the incident has begun their investigation.

"I have already suspended five supervisors and have recommended the suspension of three engineers. We will take further action once the team submits its report," Bhoj said.

"NDRF is continuing the rescue work however the chances of rescuing any survivor is bleak now," Kanpur range IG Zaki Ahmad said.

"A team of doctors and an ambulance are on standby in case any survivor is pulled out from the debris," the CMO said.