The young in Punjab have been hit hardest by factory shutdowns, amid allegations that corruption has hastened the economic decline. 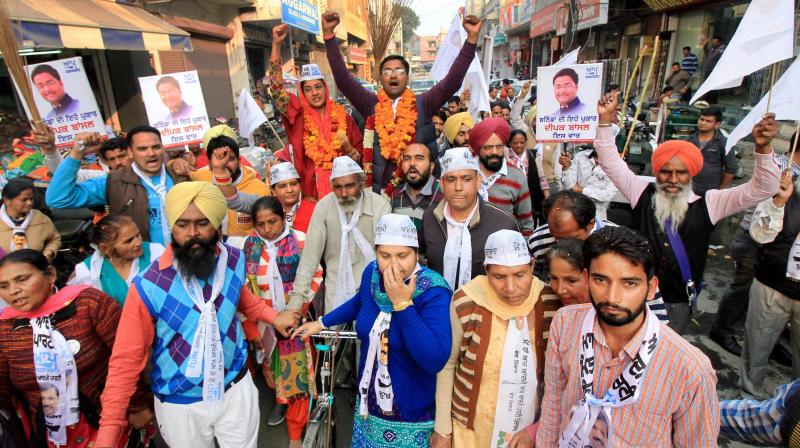 Chandigarh: Twenty-seven-year-old Rupinder Kaur Ruby is a political novice but her message is clear: jobs for young people.

Grabbing the microphone, the law student tells a few hundred supporters in a dusty village square in Punjab that the ruling parties have failed them.

"Punjab is not in a good place. And the youth are the most affected. They want to fight back," she said, raising her fist to cheers, as the crowd covered her in garlands before heading off to canvass for votes in a state election on Saturday.

Ruby is one of several inexperienced candidates her Aam Aadmi Party is fielding to tap anger among an increasingly aspirational but frustrated youth, and to challenge Prime Minister Narendra Modi as his party leaders into five state polls over the next month starting with Punjab.

A strong showing by AAP, which won a handful of seats in Punjab in the 2014 general election and governs the city-state of Delhi, would serve as a mid-term warning for the still-popular Modi as the economy fails to fulfil expectations.

The young in Punjab have been hit hardest by factory shutdowns, amid allegations that corruption has hastened the economic decline of a relatively rich state of 28 million people bordering Pakistan.

Unemployment tops voter concerns there, according to a recent poll, and young people are less and less willing to work their parents' fields in the state known as India's "bread basket".

Most recent opinion polls show Congress in the lead in Punjab, ahead of AAP which has been criticised by rivals for failing to flesh out how it would boost employment were it to come to power.

But Ruby's party is most popular among the young, reflecting a generational shift in India that poses a problem for Modi as newer parties seek to capitalise on the lack of jobs.

Nearly two-thirds of the Indian population is under 35 - a demographic "bulge" that will create the world's largest working-age population before 2050.

Despite average annual economic growth of 6.5 percent between 1991 and 2013, India added less than half the jobs needed to absorb new entrants into the workforce.

The incumbent Shiromani Akali Dal (SAD) party that rules Punjab alongside Modi's Bharatiya Janata Party, and Congress, have governed the state alternately for decades with a focus on Sikhism, the state's dominant religion, and farm subsidies.

Those priorities resonate less among the young, and now all the main parties are promising free smartphones and 2,500 rupees a month for the unemployed.

"The other parties are all the same," said 30-year-old Jaskaran Sharma, who works as a truck driver in the Middle East and was helping with Ruby's campaign in between jobs.

"She is energetic, and young people understand the system," he told Reuters in the village of Teona.

Punjab's official unemployment rate in 2015/16, at 6 percent, was above the national average of 5 percent, according to the Labour Bureau, although economists say the figures do not reflect the true picture.

Levels of underemployment are higher; only 17 percent of Punjab's population earns a regular wage.

AAP, which scored surprise wins in local elections in Delhi in 2013 and 2015 on a broad anti-corruption platform, is led by 48-year-old Arvind Kejriwal, a former tax inspector who hopes to expand into other regions by channelling anger over unemployment.

AAP workers like Ruby, daughter of a local government retiree, have built young teams to fan out across villages and campaign door-to-door.

"We depend on our volunteers. This is a ground-up campaign," she told Reuters over tea and biscuits, while young men snapped photos with her.

Ruby has the lowest declared wealth, at 175,000 rupees ($2,600), of any candidate in the state, according to reports. The 10 poorest candidates are from AAP, although the party has also chosen several well-off politicians as candidates.

"The youth are looking for change, and for that they are going to take a risk with AAP," said Ashutosh Kumar, a professor of political science at Panjab University.

The ruling party, led by the wealthy Badal family, still commands support among older generations and better-off farmers, while Congress is attracting voters who see AAP as inexperienced.

Sitting outside the office of his SAD party in the Badal heartland of Lambi, landlord farmer Bagga Singh said Kejriwal was a "traitor" who had fooled people.

The protest vote boosting AAP would peter out, he predicted, because the Badals had established skill centres, curbed corruption and job creation would soon pick up.

Still, he acknowledged more needed to be done.

"Young people don't want to work in agriculture. The margins are down and they don't want the hard work," the bearded 70-year-old said, wearing a pink Sikh turban. "They want to sit in an air conditioned office."