Women reservation: Army out after Kohima mobs go on rampage

Army jawans reached Kohima and also carried out a flag march in Dimapur. 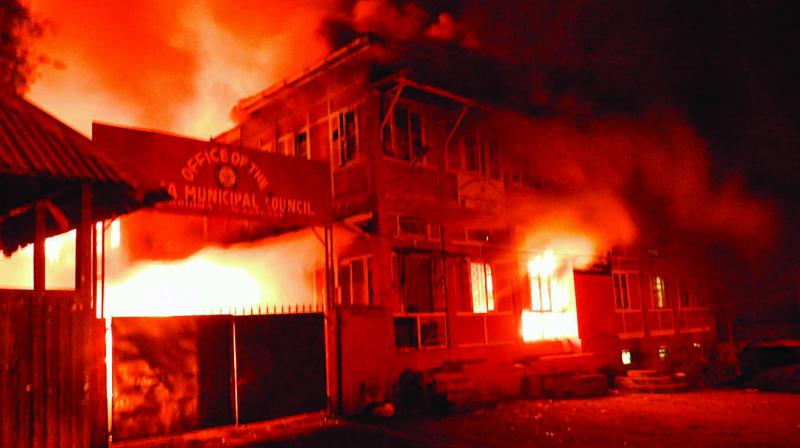 Kohima/Guwahati: The Army was called out late Thursday as thousands of protesters went on the rampage and torched government property in Kohima, in an escalation of violence related to protests against 33 per cent seats reserved for women in the state’s urban local bodies.

Protesters had asked chief minister T.R. Zeliang to resign by 4 pm Thursday after two people were killed in police firing in Dimapur two days ago, when a mob was protesting over the reservation issue.

Mobile Internet service has been shut down. Army jawans reached Kohima and also carried out a flag march in Dimapur. Curfew restrictions were already in place in both towns.

Elections to urban local bodies in 12 towns across Nagaland were conducted Wednesday amidst a shutdown called by tribal bodies.

Protesters want the 33 per cent reservation for women rolled back as they  believe it violates the right granted to Naga tribals as per the Constitution’s Article 371(A).

The latest violence erupted when protesters, carrying the bodies of the two people killed earlier, gathered in Kohima and tried to stone the CM’s house prompting the police to open fire. Protesters backed by various tribal bodies accused the state government of breaching an agreement on postponing the elections for two months.

In view of the deteriorating law and order situation, Nagaland governor P.B. Acharya, who was in Arunachal Pradesh’s capital Itanagar, was advised not to come to Kohima, where the CM and his home minister remained indoors. Protesters want the governor to come and talk to them.

Meanwhile, ruling Naga People’s Front (NPF) MLA N. Keditsu resigned from the Assembly to protest the killing of two youths from his constituency.

Sources said that protesters also set NPF headquarters in Kohima on fire. There was anger brewing also against the local BJP unit as Nagaland BJP president was accused of supporting the government’s stand.